Alert: Bug identified in Monero client 0.14 with application 1.1.3; users advised not to use Ledger Nano S

Alert: Bug identified in Monero client 0.14 with application 1.1.3; users advised not to use Ledger Nano S

Earlier this week, the Ledger team made an announcement via Monero’s official subreddit regarding a bug found in the last version.

Users reportedly lost their funds due to this bug. However, there was no clear information pertaining to the bug. Additionally, Kraken, a leading cryptocurrency exchange platform, suspended its Monero funding services temporarily.

“In the last version of Monero client 0.14 with application 1.1.3, it seems there is a bug with the change address. The change seems to not be correctly send. Do no use Ledger Nano S with client 0.14 until more information is provided.”

“[…] But if the problem is with change addresses, then however small the amount you send, you entire balance or perhaps a big chunk could get potentially lost? So how could one even be ‘careful’ if one wanted to be?” 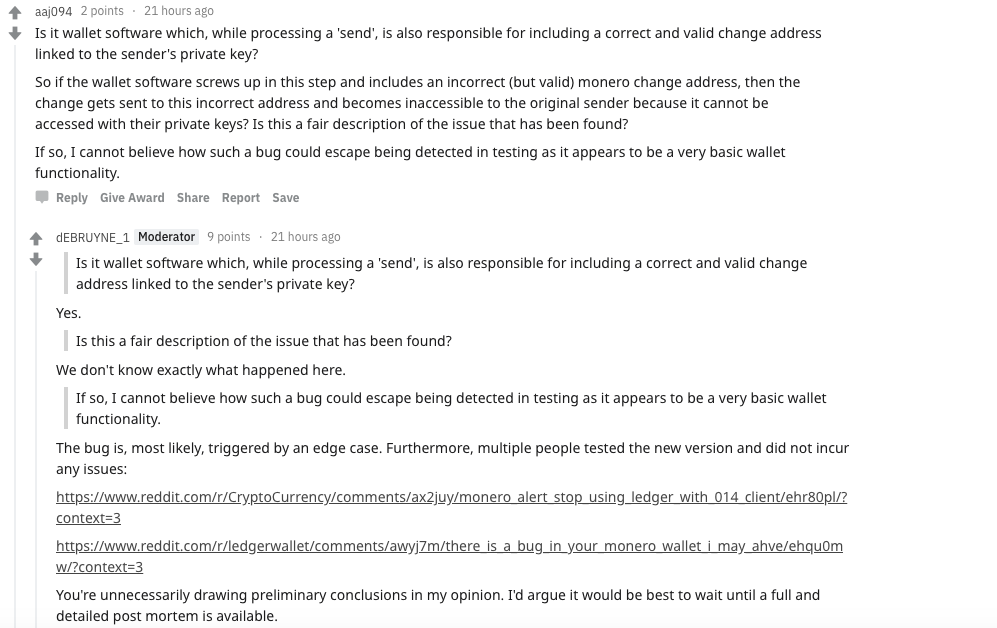 Udi Wertheimer, a Bitcoiner and coder, tweeted that spending the coins stored on Ledger could cause a massive loss of funds because of the bug. He also advised users holding XMR in a Ledger wallet to not do anything until further notice.

“The problem seems to be with a way that a new Ledger update handles change outputs, but there’s still a lack of details. From what I can gather, if you have XMR on a Ledger, and don’t spend them before this is fixed, you should be fine.”

Kraken also released an official statement on its own portal. The first notice stated that the funding would be offline as the exchange was performing an “unexpected maintenance” operation, adding that they would be notified once it was back online.

The second notice stated that the Monero Vulnerability Response Group received information about the bug related to Coinbase transactions. This was followed by the exchange stating that they were waiting for the Monero team to release a patch and further information on the bug would be released once the solution was implemented.

Rafficer, an XMR contributor, stated on Reddit that this bug is not related to the Ledger bug. He added,

The views and opinions expressed in the article Alert: Bug identified in Monero client 0.14 with application 1.1.3; users advised not to use Ledger Nano S do not reflect that of 48coins.com nor of its originally published source. Article does not constitute financial advice. Proceed with caution and always do your own research.

In rounding off this piece: Alert: Bug identified in Monero client 0.14 with application 1.1.3; users advised not to use Ledger Nano S. Here’re most prominent words: