From Steve Wozniak’s take on Bitcoin to new adoption for Ethereum and XRP, here’s a look at some of the stories breaking in the world of crypto.

In a new interview, Bloomberg’s Yousef Gamal El-Din asks Wozniak about Bitcoin, saying “We’ve seen massive value destruction in Bitcoin. Are you still a believer in that? Is that still a workable model for you?” In response, Wozniak rejected the premise, saying Bitcoin has created massive value.

There was a period of time – psychology will often drive stock market dips, like ‘Oh my gosh, gotta get out now!’ The psychology factor’s kind of a fear thing. And there was this idea that Bitcoin might go up to $40,000 and it went up to $20,000.”

Wozniak says he only bought Bitcoin to test out the technology, and decided to sell during the last bull run.

“I had a lot of Bitcoin, but never as an investor. I only had Bitcoin to experiment with and find out how to buy and sell things around the world, how to travel and find restaurants that would accept Bitcoin. That sort of thing.

And so when it went up high I said woah, wait a minute. I do not want to be one of these people – I don’t invest in stocks, I’ve never used Apple’s stock app. I don’t want to be one of these people watching the price of Bitcoin, so I sold out. And I don’t know where it is now, but wherever it’s way over what I bought. And I still experiment with it on new Bitcoin devices and all.” 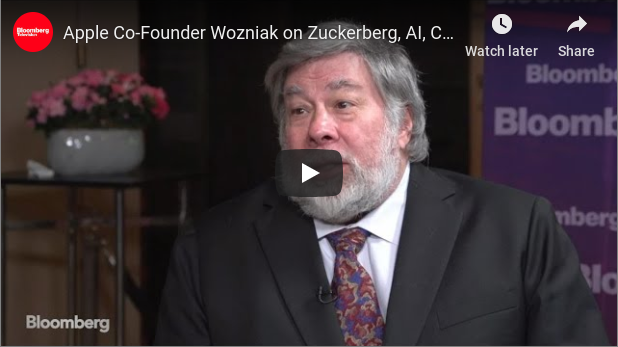 A $66 million building will be tokenized on the Ethereum network.

Inveniam Capital Partners (ICP) says it decided to use the blockchain to offer investors a higher level of transparency, reports CoinDesk.

“The company plans to tokenize some $260 million in four private real estate and debt transactions, starting with a WeWork-occupied building in downtown Miami, Florida.

Announced Tuesday, the firm intends to sell tokenized shares of the building, valued at $65.5 million, likely the largest piece of real estate to be financed this way to date.”

UK-based hotel booking company Trippki says it will support XRP when it launches in the first quarter of this year.

The company plans to aggregate hotel listings, and says its platform will allow users to book more than 1.6 million hotels with crypto.

Fed up of paying for your hotels in fiat?

Soon you can choose from over 1.6 million hotels and book with $XRP ⚡⚡⚡#Ripple @haydentiff #XRPCommunity #XRP pic.twitter.com/uH5mxdzqBc

Litecoin is now accepted as a payment method on GLORY’s online merchandise platform.

As a result, GLORY is now the first professional sports league to integrate Litecoin into the end-to-end fan experience.

Excited to announce a new partnership with @GLORY_WS that will see #Litecoin becoming the official cryptocurrency of the world’s premier kickboxing organization. Read more about how you’ll be able to #PayWithLitecoin for GLORY events and more ⚡️ https://t.co/g5k7M1vQwV pic.twitter.com/DOIhq8YvKa

The IOTA Foundation is collaborating with Hackster.io to launch a new smart city hackathon.

The global challenge features more than $10,000 in prizes, challenging developers from around the globe to solve inner city issues using distributed ledger technology. The hackathon will focus on four key areas.

The views and opinions expressed in the article Apple Co-Founder Says Bitcoin Has Triggered Massive Value Creation, Plus Ripple and XRP, Ethereum, Litecoin, Tron, IOTA: Crypto News Flash do not reflect that of 48coins.com nor of its originally published source. Article does not constitute financial advice. Proceed with caution and always do your own research.