Bitcoin [BTC] presently is firmly consolidating at the $8,700 mark, on the back of a massive spot growth. However, the BTC Futures market, which is growing on the back of CME’s unparalleled success off-late, might play the proverbial “periodic spoil-sport” once again.

The Bitcoin Futures contract is set to expire on 31 May and given the volumes these derivative products have amassed, the price effect on the larger market will be substantial.

While the market is enjoying a bullish wave, the rally which has persisted since April has buoyed both the spot and futures market. Days after Bitcoin marked a daily gain of over 15 percent, CME saw its futures contracts rise by over 950 percent in a day.

As was seen and attested to by Fundstrat’s Tom Lee back in December 2018 when the previous set of Futures contract expired, spot price tends to fluctuate. Speculation also persists that during the expiration week, or rather post it, the price tends to drop, find support and rise back up. 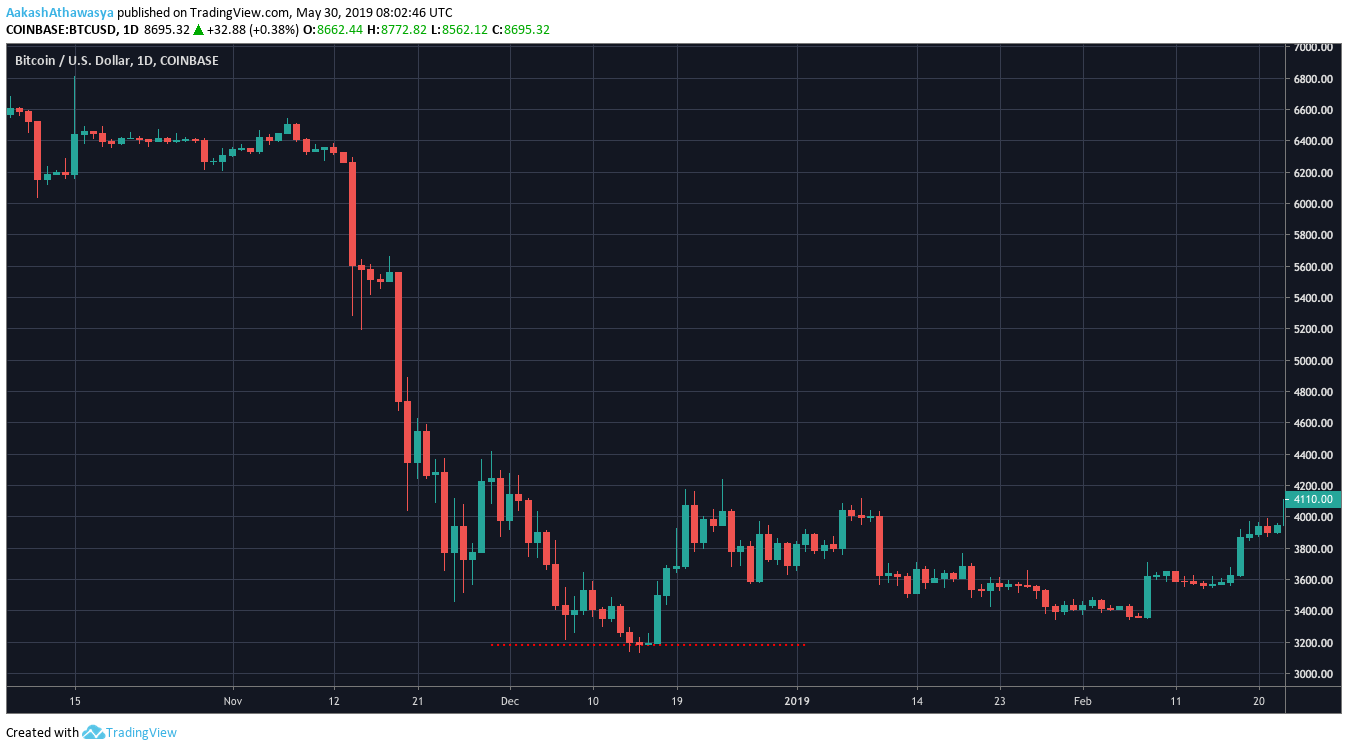 As can be seen in this case, the fluctuation, drop, and rebound does hold. However, it should be noted that the drop was a consequence of not just the prolonged crypto-winter, but the Bitcoin Cash [BCH] hardfork as well. Splitting in mid-November, BCH let loose the bears which plummeted the collective market. 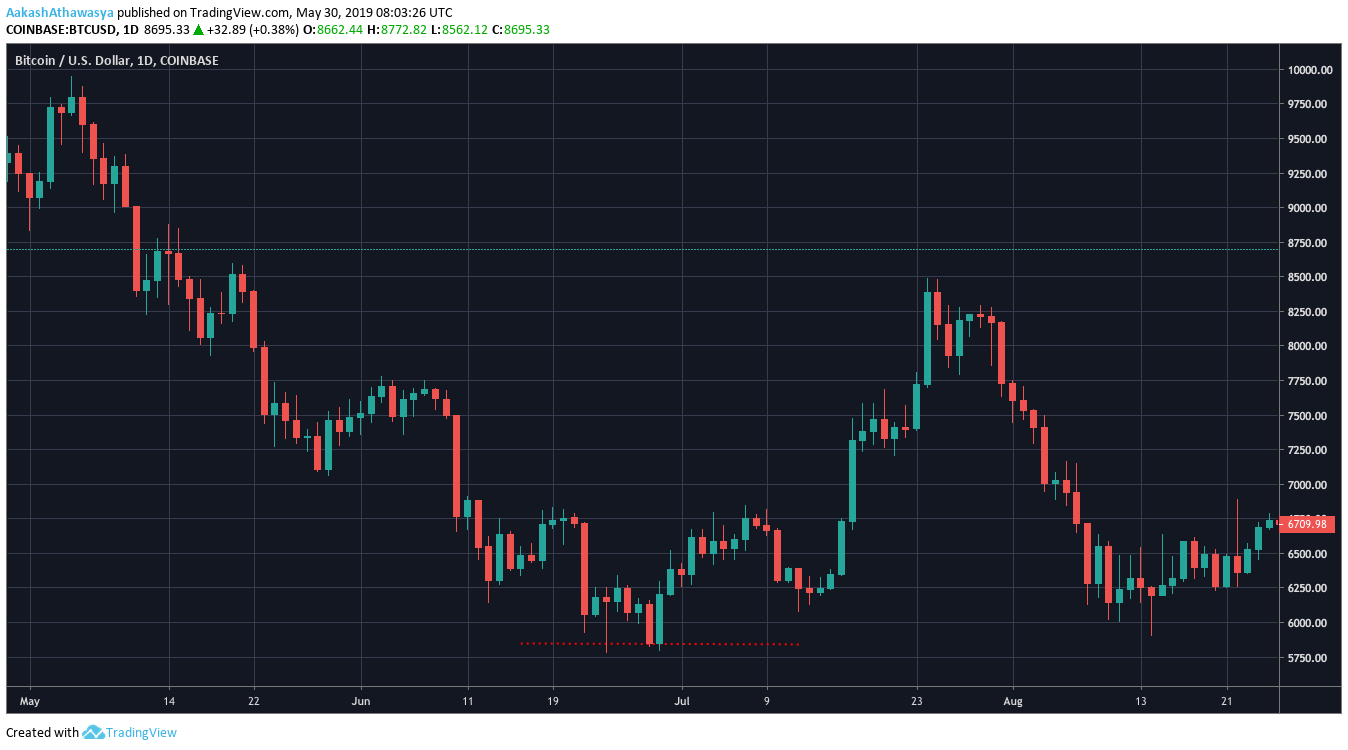 The Bitcoin contracts that expired during the close of June 2018 also paint a similar story. With the king coin dropping below $7,000 and even dipping below $6,000 briefly prior to the expiration date, the market was primed for a major movement. Bitcoin was hovering over $6,200 and as the contracts expired, the coin found support at $5,900 and rose back up to $6,400, in a matter of less than three days.

Given the above two cases present a brief drop, support-hit, and a rebound, the current market is pegged to do the same, although one can never be certain with the volatility in the market. It should be noted that the Futures acceleration in the current period, is severely higher than it was in the aforementioned periods, particularly because of the price rally.

The daily volume chart of Bitcoin futures shows that Wall Street’s trading activity in cryptocurrency has been off the charts. On May 13 alone, over 33,000 contracts were traded, each valued at 5 BTC per contract, with the price in the 24-hours prior rising from $6,800 to $8,200.

Owing to the sheer severity of the Dollar-value of Bitcoins traded and regardless of the fact that these contracts are cash settled, and that previous expirations have led to a brief dip in the market, a pull-back could be prolonged if market correction forces join in. The last “correction” post the May 13 rise saw the coin shave over $800, dropping below $8,000.

If this correction does manifest and if caused by the expiration brief-bears, Bitcoin should find support before rising back up. Given the pullback was seen not that long ago, if Bitcoin does drop it could find solace at $7,200 before a quick dip. However, the severity of the contracts traded and the price push of the coin could prolong this drop, in time and in price. 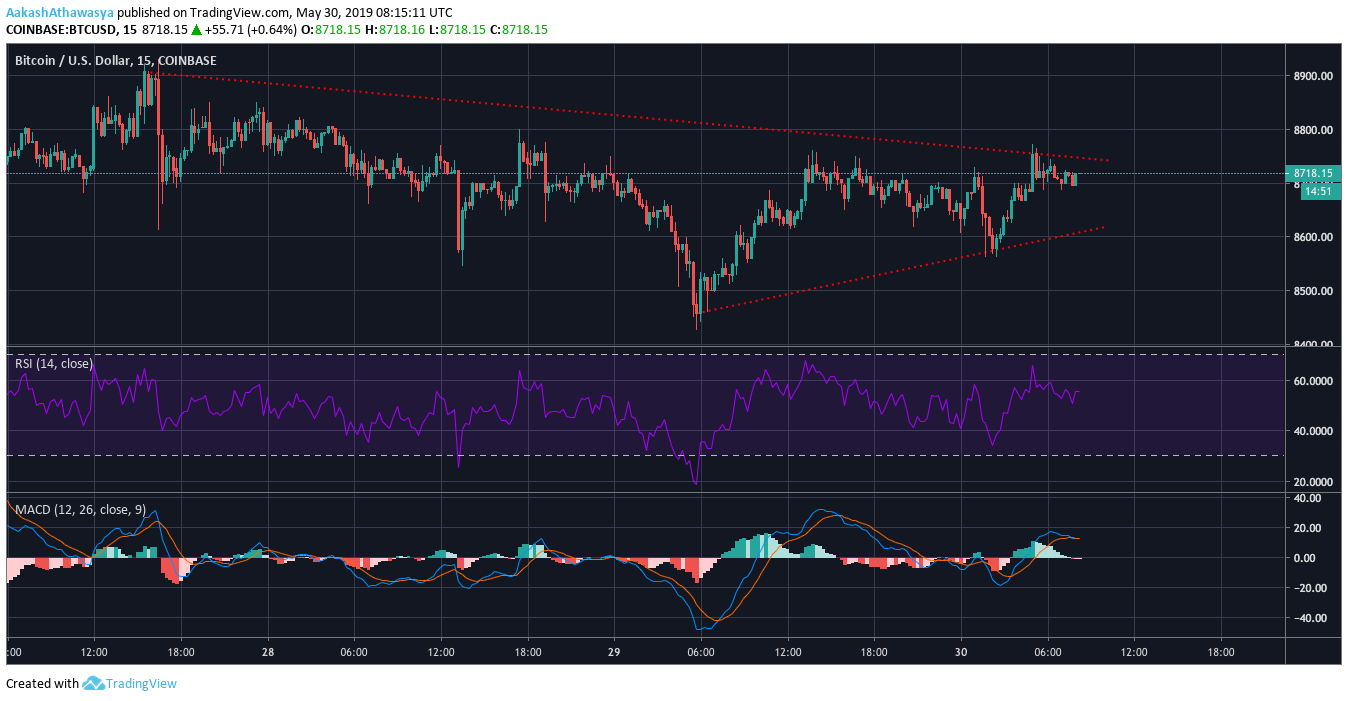 The present Bitcoin market does not fear the speculated imminent bearish movement, as its consolidated hold over $8,700 is looking to sustain itself. The Relative Strength Index [RSI] is holding steady at 52.58, rising from 32.22 in the past 2 hours, while the MACD line shows bullish movement, and was over the Signal line.

With just a day to go for the CME Bitcoin contract expiry and the market weathering the storms caused by Bitfinex and Binance in the past month, Bitcoin looks to stand resolute. However, stressing once again on the explosion of Wall Street’s BTC trading activity, the expiry of the same could cause a domino effect of price turbulence. Only time will tell which way the movement will manifest.

The views and opinions expressed in the article Bitcoin [BTC] CME Futures contracts on verge of expiry; Spot market to face turbulence?  do not reflect that of 48coins, nor of its originally published source. Article does not constitute financial advice. Kindly proceed with caution and always do your own research.