Earlier this week, Samson Mow, the Chief Strategy Officer of the blockchain firm Blockstream revealed several facts and opinions about the mining giant, Bitmain, at the onset of its upcoming Initial Public Offering [IPO]. The CSO released a translation of an article about the subject on his Twitter page, talking about the history of Bitmain to expose its vulnerabilities and suspicious activities. 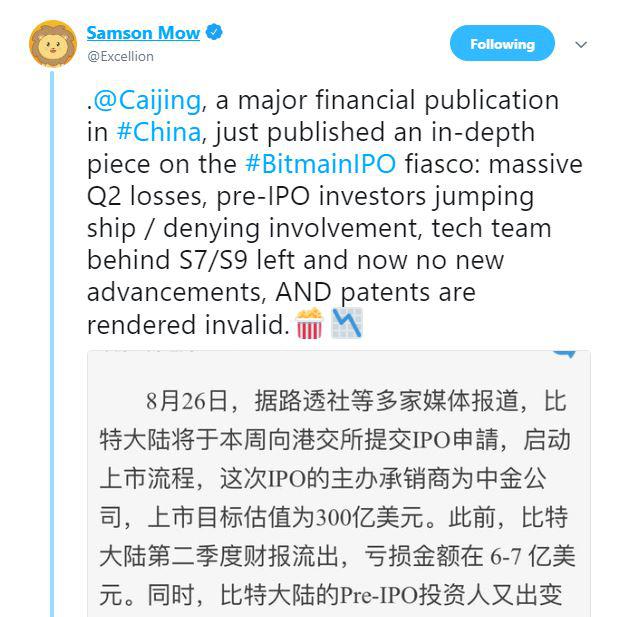 In the given article, the journey of Bitmain with and without the designer of its Antminer S7, S9 chips, Dr. Yang Zuo Xing is described. According to this information, the idea of these chips was not built by the original developers of Bitmain but by Zuo Xing. These were the two flagship products that identified Bitmain as the biggest mining player in the market.

Mow translated that Zuo Xing was the reason for Bitmain to be able to capture a huge chunk of market share and witness success. After leaving Bitmain, the chip designer started his own mining company, ShenMa, as a competitor to his former company, stated Mow. Subsequently, when Bitmain attempted at producing new chips, such as 16nm BM1X89, 12nm BM1X90, 10nm BM1X93, it failed miserably in the market.

In earlier days, the mining giant charged a legal attack at its competitor, ShenMa, accusing the company of patent violation. Here, post multiple appearances of both the parties in court, the Patent Reexamination Board of the State Intellectual Property Office concluded that the allegations put forth by Bitmain were invalid. Mow also added:

According to Caijing, a news magazine based out of China, Zuo Xing spoke about developing chips for Bitmain before building his own company. He said:

The issue of Bitmain and its controversial IPO emerged recently after the company released its pre-ICO investment deck where accusations of Bitmain misrepresenting its funds were made. Multiple portals have also reported that the investors, namely, Softbank and Tencent have denied any investments in the IPO.