Bitcoin [BTC], often touted as the digital gold, aims to replace its tangible equivalent and is certainly doing so when portfolios are scrutinized. With Bitcoin adding over $5,000 to its price at which it began the year, investment in the top cryptocurrency is seeping away the market share of Gold, with one key player gathering steam.

Grayscale Digital Assets Fund is spearheading the campaign to convince investors on the institutional front to #DropGold and invest in Bitcoin, which is gaining momentum with every bullish BTC cycle. As Bitcoin rose above the $8,500 mark and recorded a yearly high, Grayscale’s Assets under Management [AUM] broke the $2 billion ceiling.

In a 28 May update regarding the investment firm’s holdings per share and net assets under management for both their Single Asset Products and their Diversified Products, Grayscale stated that their Total AUM valued $2.1 billion [$2.072 billion considering both single and diversified products]. Single Asset Products notched $2.05 billion while Grayscale’s Digital Large Cap Fund had an AUM of $18.4 million. 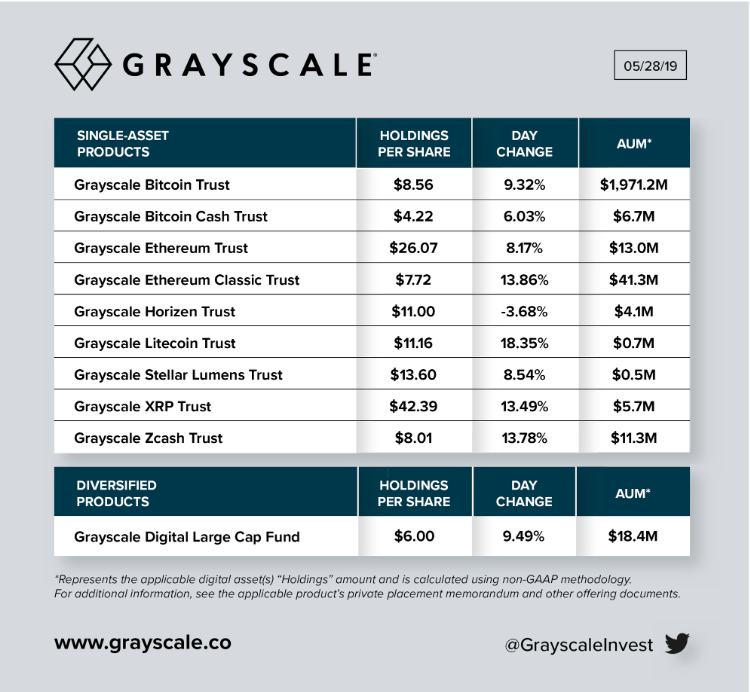 The Digital Silver Trust, LTC, saw the highest day change of 18.35 percent owing to the August halving bulls pushing the coin over $100. Ethereum Classic, XRP and Zcash, each saw their trust’s day change soar over 13 percent, as altcoins rode the BTC bullish wave. Bitcoin Cash despite reclaiming its fourth spot on the coin ladder saw the least change among top cryptocurrencies, at 6.03 percent.

Bitcoin, unsurprisingly, has the highest AUM, at $1.97 billion, while the remaining $82 odd million is divided between the altcoins. The top altcoin in Grayscale’s offering is the ETC trust, at $41.3 million, followed by Ethereum, Zcash and Bitcoin Cash at $13 million, $11.3 million and $6.7 million respectively.

Grayscale’s soaring portfolio coupled with the unstoppable bullish wave of the collective market, has certainly made top financial assets like Gold insecure. It’s no surprise that with Bitcoin’s tag of “digital gold,” the ousting of the commodity is an enticing prospect, and Grayscale has been ushering the same with their #DropGold campaign.

Barry Silbert, the CEO, and founder of the Digital Currency Group, the parent company of Grayscale has been at loggerheads with several influencers from the Gold camp, most notably Peter Schiff from Schiff Gold. The two have voiced their oppositions and opinions on social media, painting an interesting picture of the tussle.

To add on to the market sentiments shifting towards the crypto-sphere, thanks, in no small part, to the Grayscale’s marketing team, several top institutions are looking to #DropGold. Wells Fargo officially stated via John LaForge, the company’s Head of Real Asset Strategy, that gold is in a “dull period.”

Gold’s major selling point as a safe haven investment in a time of financial uncertainty is looking to end, as LaForge added that there are ‘better defensive assets.’ He concluded stating that “there is no interest left in [gold],” a point, quite gleefully attested by Silbert on Twitter, as Grayscale’s #DropGold campaign seems to be turning the tide on Wall Street.

Since the beginning of the year, the spot price of Gold per ounce, decreased by 0.077 percent, while Bitcoin increased by 126.3 percent.

The views and opinions expressed in the article Bitcoin [BTC] price tide buoys Grayscale AUM over $2 billion as #DropGold campaign gathers steam do not reflect that of 48coins, nor of its originally published source. Article does not constitute financial advice. Kindly proceed with caution and always do your own research.