Bitcoin [BTC] rose by over 50 percent in May alone; did the US-China trade war have anything to do with it?

Bitcoin [BTC] finished April 2019 in incredible stead, holding on to the bulls that amassed a massive 17 percent daily gain on the second day of the month, with the following month surpassing expectations yet again. Despite May beginning with news of the Binance hack, the month saw the king coin rise by over 50 percent, while two pivotal players of the cryptocurrency world engaged in a modern war, the United States and China.

With no clear source behind the price rise and the bulls persisting in their rage, economist and cryptocurrency analyst Alex Krüger, analyzed the online chatter in the two giants, while looking at Bitcoin’s price rise during the ongoing US-China Trade war. The economist initially laid out Baidu’s [China’s Google equivalent] search history, something which showed that China’s interest in Bitcoin is on the rise, fueled primarily because of the recent price pump.

To further provide context to the link between BTC’s popularity and its price, Krüger showed how the four price breakouts moved in cahoots with Baidu search spikes. In reference to the same he stated, “Interest in Bitcoin spiked either after price breakouts or during breakouts.” This trend was mirrored on a worldwide basis, with Google search results as well.

However since May 14, three days prior to a $700 pullback, “interest dropped drastically,” which Krüger equated to a “bearish divergence.” With the price rally losing steam since June commenced, the Bitcoin fever of the common Chinese populace declined. 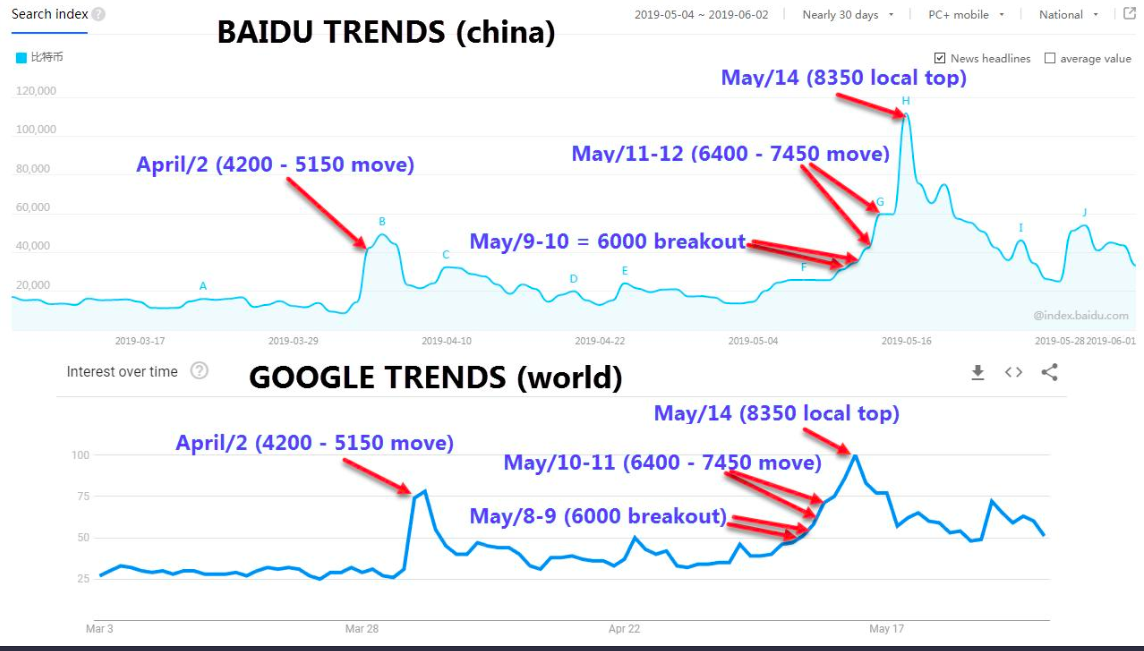 “In both China and the World interest dropped drastically since May/14, while price kept moving higher — a bearish divergence. As of Sunday Jun/2, the Baidu Trends level was back to May/9 levels, when bitcoin was trading at $6,000.”

The trade war between China and the USA was rekindled after the President of the United States, Donald J Trump, tweeted that tariffs on China would be hiked. For a brief period, the term “trade war” spiked over “Bitcoin,” with the terms “stock” and “Trump” also trending. However, “Bitcoin” was the only term that saw constant attention, whereas the other recorded short-lived upticks.

Between 15th May and 3rd June, “Bitcoin” was queried on Baidu over the other three terms, despite constant back and forth between the administrations of the United States and China. “Bitcoin” took off only after the price cracked $6,000 and hours later, it broke $7,000.

As China called for a “People’s War Against the US,” search engines saw massive traffic for USD/RNB as well, which moved in line with Bitcoin since May 15, with spurts of outgrowths.

Krüger contends that this pattern is analogous to last May, during the predecessor to the current trade war, which indicated that the correlation was not isolated. He added that BTC search results moved together with the USD/RMB currency query and the trade war questions of May 2018 as well.

To sum up, Krüger stated that common interest in Bitcoin broke out when the coin surpassed $6,000, which also coincided with the Trade War and the Yuan queries. However, during this period, the trade war had already been raging. In light of these facts, the economist believes,

Given Bitcoin search results’ correlation or lack thereof, with questions regarding Trump and the Yuan, in context of the larger US-China trade war, Baidu search results do not point to a cause and effect. Bitcoin seems to have escaped the Chinese shadow and is moving to different regions to amass growth as the government is currently in the process of phasing out the China Bitcoin mining industry, deeming the process too “energy intensive.”

The views and opinions expressed in the article Bitcoin [BTC] rose by over 50 percent in May alone; did the US-China trade war have anything to do with it? do not reflect that of 48coins, nor of its originally published source. Article does not constitute financial advice. Kindly proceed with caution and always do your own research.