On 29th August, BitPay, a payment service provider announced on Twitter that merchants on their platform now have an option to receive digital currency settlement in Bitcoin Cash [BCH]. This is the platform’s second settlement option after Bitcoin [BTC]. 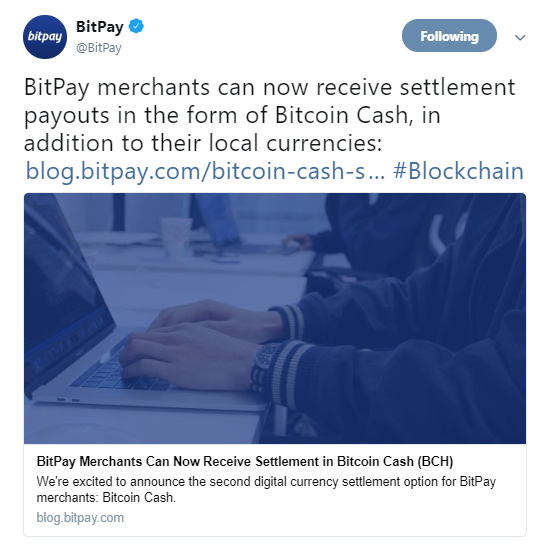 The BitPay Settlement payout is a process wherein a BitPay customer chooses to pay merchants with Bitcoin during the checkout process. The customer makes the payment through a BitPay invoice at a locked-in exchange rate. Through this system, the customer will know the exact amount of money that the merchant will receive when the currency is sent.

BitPay will then instantly convert the Bitcoin or Bitcoin Cash into fiat currency and directly deposited to the merchant’s bank account.

BitPay which was established in 2011 had begun its Bitcoin cash payment processing earlier in May wherein BitPay merchants were able to accept BCH payments from customers alongside Bitcoin payments. Now, merchants can receive their settlement payments in Bitcoin Cash in addition to their supported fiat currency as well.

According to BitPay’s official blog, merchants can receive Bitcoin Cash settlements by selecting the settings option from the dashboard, followed by ‘settlement’ option. Further, choose the ‘edit’ option available next to the ‘cryptocurrency address’. Following which, the merchant must add their wallet address for either BTC or BCH depending on the required currency.

“You know what else has fast and cheap fees? Any other of the thousands of cryptocurrencies- including the much more decentralized, permissionless, un-censorable, likely to succeed, valuable and liquid cryptocurrency called Bitcoin. The ticker is $BTC if you want to check it out.”

“This would be neat if you guys actually supported the BTC core wallet!

“Excellent. Seeing as BTC is no longer suitable or intended for payments, it’s great to see a growing emphasis on Bitcoin Cash (BCH). Bitcoin is cash!”

“Lol, why would any merchant want payouts in alt-trash?”