Bitcoin SV [BSV] once again fell to the bears as the collective market traded sideways, with a cumulative market cap of $133 billion.

BSV was the biggest loser in the top 20 with a 3.59 percent decline against the US dollar. At press time, Satoshi’s Vision was trading at $65.82.

The nChain-spearheaded project posed a market cap of $1.16 billion, ahead of a bullish Cardano [ADA] by just $37 million.

IDCM took the top spot in terms of BSV trading volume dominance, accounting for 18.6 percent of the global volume via the trading pair BCHSV/USDT. Other dominant exchanges were Bit-Z, HitBTC, and BitForex.

A lack of strong, stable movement resulted in two successive downtrends for the coin. The first downtrend dropped the coin’s price from $70.02 to $68.51, and the second downtrend further shaved the price from its previous low to $66.69.

The Bollinger Bands pointed to a massive increase in volatility as the price of the coin took an immediate downward turn, while the Moving Average line indicated a bearish swing to the BSV market.

The Chaikin Money Flow tool showed that the inflow of money into BSV tokens had declined as the CMF line was below 0.

The Awesome Oscillator pointed to a drop in short-term momentum, and since the concluding bars were turning red, bearish trends were in the offing. 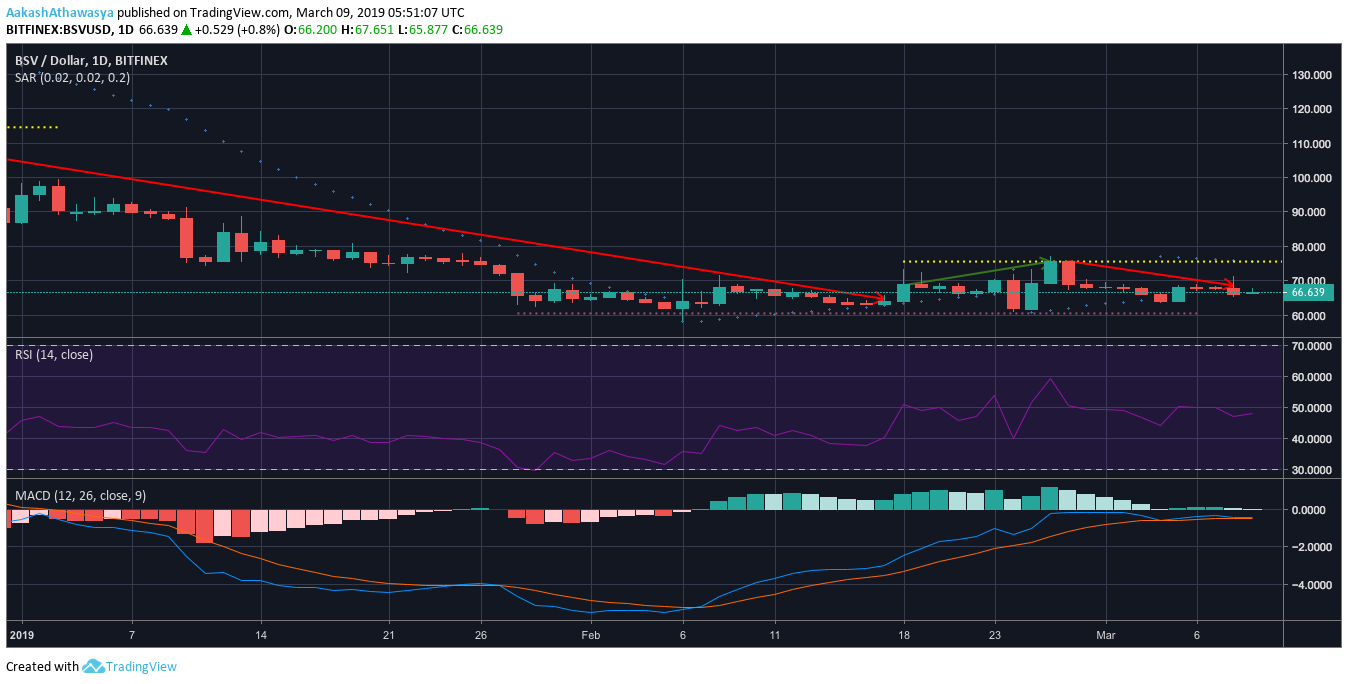 Bitcoin SV looked to recover from the bearish market during the late-February rise, but the coin dipped down soon after. The coin’s downtrend stretched from $122.23 to $64.69, following which the coin shot up from $68.65 to $75.57. At press time, the coin experienced yet another downtrend beginning at $75.71.

The coin’s immediate support level stood at $60.51, while Bitcoin SV’s immediate resistance level was found at $75.57.

The Parabolic SAR pointed to a long-term bearish trend as the dotted lines were above the coin’s trend line.

The Relative Strength Index indicated that investor interest in the coin had dropped from 58.91 to 48.03, at press time.

The MACD pointed to a tussle between the bulls and the bears as the MACD line and the Signal line converged.

Bitcoin SV’s price dropped, resulting in Satoshi’s Vision becoming the biggest loser in the top 20. Short-term indicators pointed to a continuation of the bearish swing, with the coin’s momentum low and volatility high. The long-term indicators showed that the coin’s effort to pull out of the December downtrend had not borne fruit.

The views and opinions expressed in the article Bitcoin SV [BSV] Price Analysis: Bears push coin to become ‘Biggest Loser’ in Top 20 do not reflect that of 48coins.com nor of its originally published source. Article does not constitute financial advice. Proceed with caution and always do your own research.