Bitmain to desert its Hong Kong IPO plans; listing to lapse on March 27

Bitmain to desert its Hong Kong IPO plans; listing to lapse on March 27

Bitmain Technologies, the Chinese Bitcoin mining giant, might abandon its IPO application on the Hong Kong Stock exchange, which is due to lapse tomorrow. 27 March would mark the completion of six months since it filed a draft prospectus for the IPO application. According to norms, if an applicant fails to hear from the exchange’s Listing Committee after a stipulated time of six months, the listing lapses, cited Finance Magnates.

However, this has not discouraged the company as in a blog post, Bitmain said that they will restart the listing application work “at an appropriate time in the future.”

Bitmain makes the world’s largest cryptocurrency mining computers and seeks to raise up to $3 billion in new capital and achieve a market valuation of over $15 billion.

However, Founding Partner of Primitive Ventures, Dovey Wan, reported on Twitter that the Hong Kong Stock Exchange had moved the file from the active column to the inactive status, with effect from 26 March. 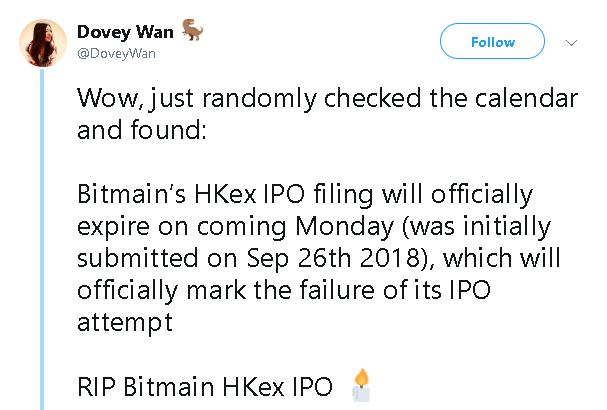 Bitmain was hoping to be listed on a major exchange, becoming the first crypto-business to become part of a major stock exchange. The IPO was expected to take place during the first quarter of 2019. However, ever since the company informed local market regulators of its flotation plans, Bitmain faced difficulties from all sides. It included declining prices of crypto negatively impacting its sales, and the below-par technical performance of its mining hardware, reported the publication.

The company in their blog post noted that the listing process made it more transparent and standardized, and that the process of rationalization and optimization made their business more focused.

Earlier this year, concerns were raised over Bitmain’s sustainability after it registered a net loss of $395 million in Q2 of 2018. It was also reported that they spent $500 million on failed chips over the past 18 months. These developments and rumors heavily impacted the company’s financial capability as it lost about $500 million in the third quarter of 2018. To cut their losses, the Beijing-based company laid off an undisclosed number of staff in December 2018.

Bitmain’s market status hurt the profitability of mining operations and demand for the custom chips. The competition is also growing as Samsung announced that it would be entering the ASIC chip market for crypto-mining.

Bitmain said they established a clear business division for mining hardware, AI, mining farms and mining pools. It also integrated the resource lines for chip design, hardware, and software to provide more effective support for their important business lines, and to allocate premium resources to their key projects. The company added that it enabled the company’s main business to flourish, while reiterating their commitment to customers.