Elon Musk says he wants Ethereum [ETH] “even if its a scam”, crypto-Twitter erupts

Elon Musk, the CEO of Tesla, recently spoke up on Twitter on the state of spam accounts on the website. This was in response to a tweet about an article speaking about the removal of over 400 Twitter accounts due to their engagement in a “coordinated manipulation”.

This is due to a problem faced by Twitter users where there is an orchestrated attempt to scam various users by passing as prominent personalities. There have been many examples of influencers in the cryptocurrency space being impersonated by bots on the website, leading to people losing their cryptocurrency by sending it to scam bots.

The impersonators claim that they will send back 10 times the amount sent by the user to them, and usually utilize Ethereum [ETH] for doing so. Multiple cryptocurrency enthusiasts have fallen for this, prompting Twitter to take action against the bots.

Replying to the article, Musk stated:

When asked by one of his followers whether he would not be sending them Ethereum [ETH], in reference to the multiple spam bots that promise to do so, Musk replied:

Another one of his followers, Adam McMurchie, went along with the joke, stating:

“Any chance you can tell us anything about BFR… I’m willing to pay 200 ETH at this point.”

Notably, the BFR is one of the projects commissioned by Musk’s SpaceX company and stands for Big F***ing Rocket. In reply, Musk stated:

This led to an uproar by the cryptocurrency community, with various shillers and prominent crypto-personalities responding to the tweet. Some notable parties were Samson Mow, CSO of Blockstream, Kyle Torpey, a Bitcoin [BTC] journalist, Senor Hansel, a crypto-influencer and various other altcoin supporters.

Interestingly, there was also a bot impersonating Musk in the comments of his own tweet, where it stated: 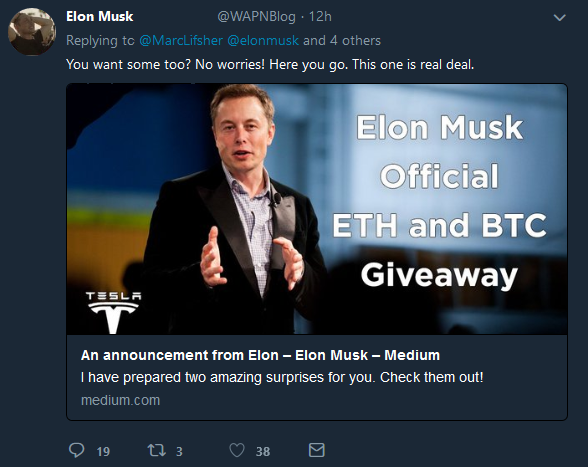 The coins shilled in the comments of the tweet ranged from IOTA [MIOTA], Litecoin [LTC], Tron [TRX], Digibyte [DGB], and VeChain [VET].

Keeping in the spirit of crypto-Twitter, many flame wars broke out in the comments, most notably below antiprosynthesis’s comment. He said:

“Scammers are using ETH, but Ethereum is certainly not a scam.”

“it’s a contentious fork led by a centralized group who used their premine and dev fund to attack the original chain, threatened those against their bailout fork, changed the defaults in the centralised codebase citing a 4% ether vote for their opt-out HF, lied to nvm out of chars”

“Just don’t get into Bcash”

“Elon, please do not overlook Litecoin as the future’s premier payment option working in synergy with Bitcoin for Payment / Store of value, respectfully.”

“If you buy ETH that will be guaranteed tears. Get some #TRON #TRX instead and ship @justinsuntron a Tesla too”

“Man, by actually mentioning ETH, you have now officially stumped the Twitter engineers in trying to effectively determine real from fake Elons.”