Unlike most crypto assets, Ripple and XRP has a landing scene. RippleNet, Ripple’s solutions and the native currency, XRP are active and in use by financial institutions as well as payment processors. And what’s more, governments, high net-worth investors and regulators believe blockchain based solutions as those riding on the Ripple Ledger could be disruptive. Even so, there seem to be a “cold war” in the crypto-verse.

From coin market cap trackers, XRP is the second most valuable coin with a market cap of $11,866 million at the time of writing but as one Redditor put it”: “many entities that seem to hate XRP and try to avoid saying its name like the plague”. This is after he found out that XRP was not listed at the Cobinhood Exchange’s help page even though the exchange has the coin on offer:

“I could just chalk it up to being an accident (and it very well may be), but they are just one of many entities that seem to hate XRP and try to avoid saying its name like the plague, despite it being #2 market cap. I just don’t understand it, why all the hate even though Ripple has been nothing but helpful to the crypto market as a whole? It can’t just be as simple as people saying “we hate the banks and Ripple helps the banks therefore we hate Ripple”

Even so, XRP is weathering the storm and after two days of immense sell pressure, XRP is steady and up 0.5 percent in the last day. What’s important is that there has been no confirmation of Jan 28 losses and prices are actually trending inside its high low. Overly, this is bullish and if anything, this could be a spring board confirming Sep 2018 buyers, cementing our overall trade assertion. 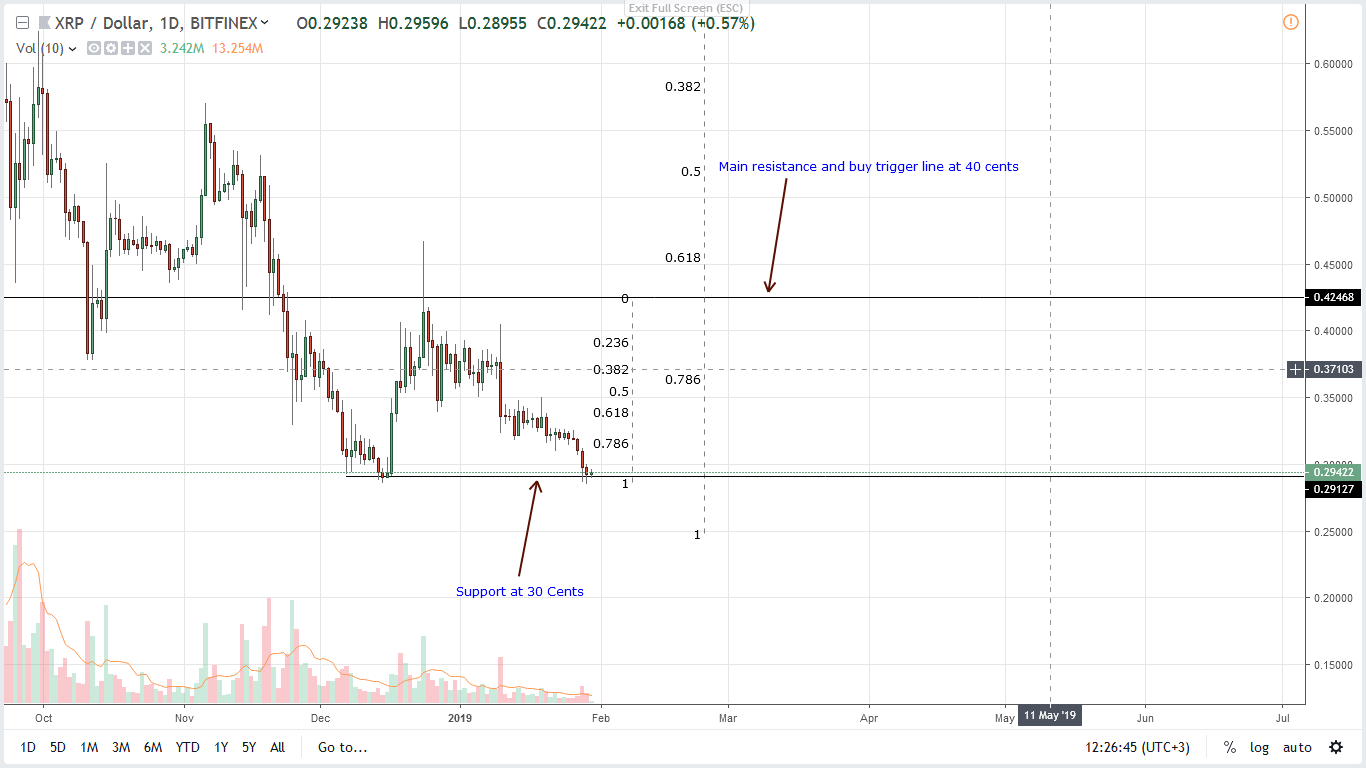 From a top-down approach, it is clear that buyers are in charge. All you have to do is zoom out and observe price action in the weekly chart. In this time frame you’ll notice that XRP is still trending inside Sep 2018 high low and bears—despite their viciousness, are yet to reverse those gains.

In the meantime, although sellers did erase late Dec 2018 gains, buyers have an upper hand in an effort versus result point of view. Note that it took 10 days for prices to rise from 30 cents to around 42 cents but took more than 40 days for bears to reverse those gains. All we need is today’s bar to close as a bull with decent transactional volumes—from BitFinex—exceeding 15 million.

As aforementioned, expected rallies should be at the back of high market participation. Recent low levels mean bulls have a chance as lower lows are generally driven by low volumes—15 million.

That means there should be spikes above 15 million accompanying higher highs driving prices above 34 cents.

Ideally, these bull bars should average around 25 million in sync with averages between Dec 17 to 28 when prices rallied from 30 cents to 40 cents.

The views and opinions expressed in the article “Entities Avoid XRP Like Plague” Supporter Claims do not reflect that of 48coins.com nor of its originally published source. Article does not constitute financial advice. Proceed with caution and always do your own research.