29 years and six months ago, in 1988, an article published in The Economist predicted the creation of a “world currency” by the year 2018. “THIRTY years from now, Americans, Japanese, Europeans, and people in many other rich countries, and some relatively poor ones will probably be paying for their shopping with the same currency,” the article began.

“Prices will be quoted not in dollars, yen or D-marks but in, let’s say, the phoenix. The phoenix will be favoured by companies and shoppers because it will be more convenient than today’s national currencies, which by then will seem a quaint cause of much disruption to economic life in the last twentieth century.”

The so-called “phoenix” didn’t exactly rise last year. However, Facebook did announce that it was considering launching its own cryptocurrency in December of 2018. Flash forward six months to yesterday, when–after months of secrecy and anticipation–Facebook finally released the whitepaper of its new stablecoin, Libra.

The coin and its corresponding network are slated to let its users buy things and send money anywhere with almost zero wait time and absolute zero fees–a couple of features that, for example, the Bitcoin network is still lacking.

While the Bitcoin network (and just about every other cryptocurrency network) has had the potential to become the one-world currency that The Economist predicted all those years ago, none has managed to become prolific enough to seriously penetrate the “mainstream” world economy and payments industry.

However, Facebook, with 2.5 billion active monthly users on at least one of its platforms–may already have proliferated global society to have the influence necessary to create a global currency based on blockchain technology, which could drastically effect the big banks, fiat currencies, and other financial instituions that the world economy is built on today. 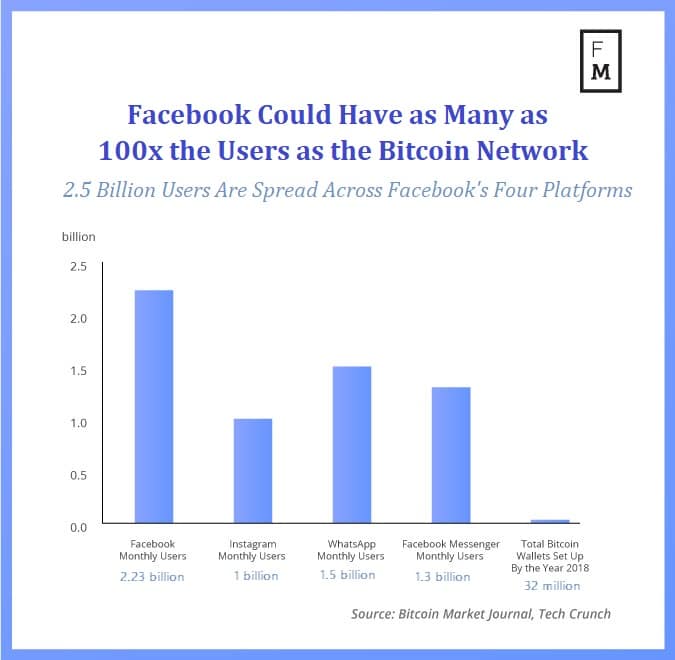 But given Facebook’s track record, can we expect the company to operate the network–and our data–responsibly?

The whitepaper that was released yesterday revealed that Facebook seems to be making more of an effort towards decentralization than many thought that it would have.

Although Facebook is in charge of the development and launch of the coin, it won’t have total control over the network. Instead, it will have just one of 100 votes in the governance of the network; the other 99 will belong to other entities that act as “nodes” on the network.

The nodes are responsible for confirming transactions and ensuring that the network’s security is continuously upheld. So far, the list includes Visa, Uber, and Andreessen Horowitz, which invested at least $10 million into the project for the opportunity to act as nodes and members of the so-called “Libra Association.”

Peter Ryan, founder of Ryan Research, pointed out to Finance Magnates that although Facebook doesn’t have absolute control over the network, it still has a pretty tight grip on it.

“[Libra] will be no more decentralized than a central bank,” he explained. “[The Libra] blockchain is validated by large institutions already selected by Facebook. If more are added you can expect them to also be chosen by Facebook and already large incumbents. Thus, they are able to freeze transactions and ban users in their centralized role which is drastically different from other cryptocurrencies.”

The Libra Stablecoin Will Be Pegged to a “Basket” of Assets

And of course, if Libra is too centralized, it may not be as stable as it needs to be. After all, if the Libra Coin is going to truly be a “global” currency, the stability (or volatility) of its value could have major effects on the world economy.

Matt Branton, CEO of stablecoin company Neutral, explained that “Libra will employ a basket model, meaning that the stablecoin will be pegged to an aggregated basket of multiple assets, rather than being pegged to a single fiat currency.”

“This has been proven by Neutral to be beneficial to investors. The use of a basket offers increased stability through diversification, by countering the unexpected volatility found in instruments backed by a single centralized component,” he added.

Branton reiterated that given the potential size of the project, consistency will matter more than ever: “Moving forward, the challenge for Libra remains: can they maintain the value of their token?”, he asked.

“Simply having a basket isn’t enough; the chosen currencies will experience inevitable fluctuations in price, and this will have an impact on the value of the overarching currency. Maintaining a peg can be extremely difficult, and the basket could experience significant volatility. Any mistake here could result in complete failure.”

“The value of Libra is directly related to the ability of the managers of Libra to maintain stability with their basket of four currencies,” Ryan pointed out, echoing Branton’s sentiments. “If they fail at this activity, you will see a free-floating Libra that could explode or crash in price.”

In light of several major instances of customer data privacy breaches, as well as a culture of mistrust and exploitation around the way that Facebook uses its users’ data to make money, there has been quite a stir over how the Libra network could be used to extract even more data from Facebook users. Binance CEO Changpeng Zhao pointed this out on Twitter:

Facebook Libra coin don’t need KYC. They have so much more data on the 2 billion people. Not just name, id, address, phone number. They know your family, friends, real-time/historic location, what you like… They know you more than yourself. And now your wallet too. Best AML!

But the project is allegedly a little more private than many may have thought. For one thing, users will use pseudonymous identities to buy into and cash out of Libra coins at local exchange points, which will include places like grocery stores. Once you buy Libra coins, they can be stored in Facebook’s Calibra wallet (which will be built into the Facebook, Facebook Messenger, and WhatsApp apps) as well as some interoperable third-party wallet apps.

The pseudonymous identities are an important part of the project’s vision for the future–one that could potentially have a positive outcome. “An additional goal of [Libra] is to develop and promote an open identity standard,” said Adv. Ziv Keinan, founder of Ziv Keinan Digital Assets Lawyers, who explained that “Libra believes that decentralized and portable digital identity is a prerequisite to financial inclusion and competition.”

In another apparent effort to further ensure user’s privacy, Facebook has also established a separate company, Calibra, that will be in charge of handling the Libra network. The new entity is based in Switzerland, “probably because the Swiss definition of payment token, which brings clarity to the space,” explained Keinan, adding that “this is a big win for the Swiss regulator.”

Although that may be true, there has already been some backlash about the establishment of the new entity in the jurisdiction, which has either one of the best or worst sets of financial regulations in the world, depending on who you ask.

“Facebook is already too big and too powerful, and it has used that power to exploit users’ data without protecting their privacy. We cannot allow Facebook to run a risky new cryptocurrency out of a Swiss bank account without oversight,” tweeted US Senator Sherrod Brown (D-OH).

Changpeng Zhao postulated on Twitter that although the entity itself is based in Switzerland, the fact that Facebook itself is an American company could have some (perhaps unintended) global political consequences.

Countries should encourage their tech giants to issue their own #crypto token (hopefully on #BinanceChain, I know, shameless).

Libra will increase US influence in many parts of the world. Imagine if Tencent/WeChat issued one before Facebook, where would that influence reside?

Regardless of the location of its establishment, the creation of Calibra was intended to ensure that Libra payments will never be intermingled with your Facebook data, and therefore will not be used for targeted advertising.

Instead of targeted advertising (which is a major part of the way that Facebook makes its money), Libra has several other streams of income. The network’s nodes (including Facebook and Libra itself) will earn interest on the reserves that will be used to keep the value of Libra stable, as well as the funds that users cash into the Libra network.

Along with the Libra token, Facebook will also issue the “Libra Investment Token”, a security token that will be available to the nodes that act as members of the Libra Association and other accredited investors.

The launch and sale of this security is regarded by some as a boon for the security token space.

“When a globally known brand like Facebook elects to do an STO (Security Token Offering) over traditional methods as a way to fund incentive programs and cover operational costs, it legitimizes the whole STO industry,” said Carlos Domingo, Co-Founder and CEO of Securitize.

“Hopefully, this will help raise awareness as to why an STO and digital securities are a better option for raising capital and managing the lifecycle of securities.”

”The Ultimate Revenge of the Nerds Scenario”

And the project hasn’t just been heralded as a great thing for security tokens–indeed, much of the crypto industry is rejoicing and what many consider to be crypto’s “big break.”

“This will be a huge catalyst for adoption and will validate the industry,” said Miko Matsumura, founder of the Evercoin cryptocurrency exchange. “[The] ultimate revenge of the nerds scenario. Facebook goes from being a data bank to a central bank.”

“We believe that this is just the beginning. We expect other tech giants to follow suit helping to realise the potential for blockchain to disrupt traditional financial services,”

he continued, adding that eToro looks forward to listing the Libra Coin on its trading platforms.“This is seismic moment for global finance,” said Yoni Assia, CEO of eToro, echoing Matsumura, seeming to believe that Libra’s decentralization model is adequate: “it is the first time that we have seen a tech giant and one of the FAANGS make a significant move into finance using crypto by launching a decentralised, permissionless blockchain, which will be available to billions of people.”

But not everyone sees Libra with stars in their eyes.

Alex Frenkel, VP of Product at Kin Ecosystem, told Finance Magnates that in general, “big tech entering the cryptocurrency world means more awareness and competition, which can be a good thing for the industry. In the best version, it can push companies towards even more innovation.”

That’s the ideal scenario. “The truth, however, is often far from this,” he continued. “If we take Facebook’s past behavior as a benchmark, it is more likely they will use this new technology as a way to choke off competition rather than inspiring use focused innovation.”

“The question is whether Facebook will use this technology to create a real change in how value works in the online world, or just use their token as a new payment method,” he continued.

“If they simply replace digital fiat currencies with their own token, there would be little true innovation or change. Unfortunately, it seems that this is the most likely path Facebook will follow…if this is the case, then the launch of Libra/GlobalCoin will ultimately generate considerable excitement without real change.”

The views and opinions expressed in the article Facebook Doesn’t Want to Work with Wall Street–But to Replace It do not reflect that of 48coins, nor of its originally published source. Article does not constitute financial advice. Kindly proceed with caution and always do your own research.