The removal of the option has angered users, who seemingly began looking for decentralized platforms with more room for anonymity. However, as the Wild West-like unregulated days of crypto might be coming to an end, the more p2p services might have to apply Know Your Customer (KYC) and Anti-Money Laundering (AML) efforts in order to stay compliant with the watchdogs.

Founded in June 2012, LocalBitcoins is one of the crypto industry’s longest-standing veterans. It is headquartered in Helsinki, Finland.

Unlike Coinbase — which was established the same month — and other conventional cryptocurrency exchanges, LocalBitcoins positions itself as a decentralized service that matches people who are willing to trade bitcoin. In that sense, it is easy to compare LocalBitcoins with similar p2p services like Craigslist or eBay.

Imagine a marketplace where people post their offers to buy or sell bitcoin on a bulletin board, specifying the exchange rate and location (among other things). Interested users reply to those advertisements, choosing to either meet in person and exchange bitcoin for cash, or trade remotely using online banking.

The world turned upside down

That is what LocalBitcoins was until June 1, when the cash option was suddenly removed from the platform. Now, users can only trade via online payment options, or deposit their cash directly to the seller’s bank account.

Predominantly, people choose to meet up to buy and sell cryptocurrencies with cash for anonymity reasons, since no personal information was required in the process.

It is also irreversible, Michael Foster said, who co-founded a similarly-named p2p platform, LocalEthereum, which caters to Ethereum (ETH) users. He explained to Cointelegraph:

“There is a zero possibility of chargeback fraud, which is the hardest scam to avoid when trading P2P. Chargeback fraud is when, for example, somebody sends you money via PayPal, only to reverse the transaction after receiving the goods.”

So, this is how an in-person, cash-based crypto transaction normally happens: After being matched online, both parties arrange a meetup at a public place with Wi-Fi. Then, after receiving an envelope of cash along with a wallet address, the selling party transfers the cryptocurrency on-the-spot, using their laptop or mobile phone.

“It’s best to meet in daylight, in an area with lots of people and cameras. For extra security, bring a friend, or make the exchange inside an airport or a bank,” Foster added.

While it is difficult to call this option a safe one in the conventional sense, financially wise, it is the most secure scenario, a representative of p2p exchange Bisq told Cointelegraph:

“I see the choice as a trade-off between physical safety, financial safety, privacy, and convenience. If it’s financial safety someone prefers, then cash is king. Nothing beats obtaining cold hard cash and depositing it in your bank yourself. There’s zero chargeback risk. But that financial safety comes at a risk to physical safety. […] Non-cash payment methods get around this physical safety risk, but require a person to reveal information to a counterparty that they might not want to reveal. And these methods are usually a lot more convenient too. Which one is better or ‘safer’ is a personal judgment.”

LocalBitcoins ban was dictated by Finnish and EU AML laws

LocalBitcoins started applying KYC measures in April 2018, when a trader proved on Reddit that a personal ID was now required to buy and sell bitcoin for some trade volumes.

“Error! Your trade volume has been significant in the past 12 months. Please verify your ID to continue trading,” the screenshotted message displayed.

Expectedly, the reduction of anonymity on one of the oldest marketplaces in the industry angered decentralization pundits. “RIP localbitcoins. Hi, another centralized exchange,” read one of the top comments on the thread.

The peer-to-peer exchange kept silent until May 9, 2018, when it finally announced that updated terms of service were coming into effect closer to the end of the month. Notably, the changes were performed in accordance with General Data Protection Regulation (GDPR), a European Union decree on data protection and privacy.

Thus, starting from May 25, 2018, LocalBitcoin users were asked to verify their ID on several occasions, including “trading over certain volume limits,” as well as fraud investigations, among others. They also had to be older than 16 and register only one account per person.

Almost a year later, on March 25, 2019, LocalBitcoins announced it will soon become supervised by the Financial Supervisory Authority (FSA) of Finland, soon after the Finnish parliament approved new legislation that will provide a legal status for cryptocurrency assets.

Around the same time, LocalBitcoins banned users living in Iran, presumably due to sanctions previously imposed by the United States.

On June 1, users started reporting that cash-in trading was removed from LocalBitcoins. Again, crypto traders preferring the meetup option were displeased. “It’s time to no longer recommend LocalBitcoins, EVER,” the top response to the original Reddit report reads, while the following comment contains a list of alternative platforms.

Similarly to last year, LocalBitcoins did not issue a public announcement for several days. On June 4, a statement was finally released explaining that the removal was dictated by the local regulatory framework: 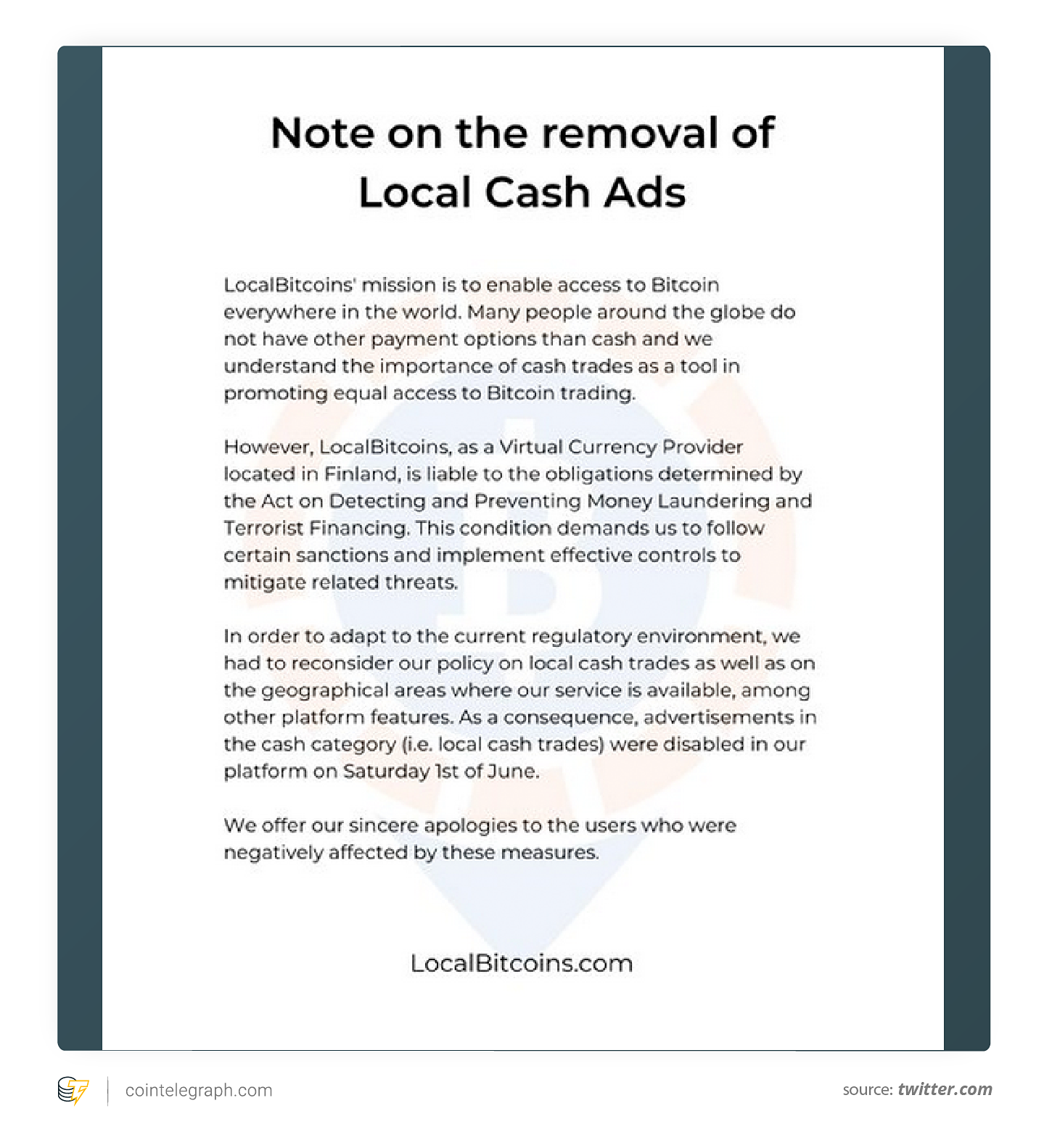 Some portion LocalBitcoins users moved to rival platforms, others attempted to bypass the ban

Four different p2p platforms approached by Cointelegraph confirmed that they have seen an increase in local cash trades ads on their platforms since LocalBitcoins removed the option.

However, in-person meetings accounted for 0.5-2% of all trades on three of those platforms, based on their answers, with one exchange reporting 16%, meaning that the general demand is quite low. A representative of the p2p bitcoin exchange Hodl Hodl told Cointelegraph:

“It [local cash trading] is not really popular, but we’ve seen an influx of traders who used to trade on Localbitcoins coming to our Telegram group and actively discussing various options on how to trade cash and suggesting improvements, which we think is great, helps us improve the workflow and we’re expecting to see more cash trades soon.”

Ray Youssef, CEO and co-founder of Paxful, another popular platform for p2p exchanges, told Cointelegraph that there was an increase in cash transactions “throughout the month of May.”

A representative for Bisq also said that it has seen more offers in the USD market lately. “Less than 2% of the trades on Bisq so far in June have been cash trades,” the spokesperson specified.

LocalEtehreum, in turn, reported “a huge uptick” in face-to-face exchanges since LocalBitcoins removed the option, in an email conversation with Cointelegraph:

“Cash exchanges made up 0.6% of LocalEthereum’s volume last month. Since the announcement, cash has climbed to 16% of volume — a 26-fold hike. We’ve never seen this level of activity for cash before.”

However, some LocalBitcoins users are not switching over, yet. Now that the “cash in-person” options are not available on the platform, some traders list those offers under the “cash deposit” tab, specifying that they are only looking for face-to-face meetups.

A United Kingdom-based trader, who has posted a similar advertisement, told Cointelegraph, “I tried to post again and it didn’t work so we tried cash deposit but that’s also kind of useless now as people want to use cash deposit service”

That trader is now considering moving to other p2p platforms. “What defeats the point of BTC anonymity is transferring funds from your own bank account through a centralized company and then purchasing BTC,” he told Cointelegraph via Telegram.

“Not very local anymore,” he said of LocalBitcoins.

Another seller based in Thailand, who prefers to stay anonymous, also confirmed to Cointelegraph that he or she was trying to bypass the local cash trades ban by listing their offer under the cash deposit tab:

“I have no idea why localbitcoins stopped the cash trades, but if they don’t make them come back in the near future, I will use other platforms. I am already looking at alternatives.”

Nevertheless, LocalBitcoins might curb those kind of ads in the near future, according to what the spokesperson for LocalBitcoins told Cointelegraph via email:

“It is not possible anymore to create local buy/sell ads for cash money, all the existing ads are being removed.”

LocalBitcoins declined to comment on how popular cash trading was on their platform prior to the removal. Also, when asked whether any other KYC-related changes should be expected from LocalBitcoins in the light of local or EU regulations, the spokesperson said it “will inform our users as soon as possible,” if something should happen.

Now that LocalBitcoins had to abandon the cash in-person trading, its rival p2p platforms are picking up a fraction of its traders. But will they remain pro-anonymity amid the increasing pressure of compliance in the industry? Hodl Hodl representative told Cointelegraph:

“As for us, we’d rather shut down and stop operations than subject our users to KYC/AML. There’s simply no market for a P2P exchange that does KYC/AML. The only reason LocalBitcoins is still making money is because the majority of their volume is from jurisdictions where the KYC/AML info that users provide is not yet affecting said users.”

The Hodl Hodl spokesperson agreed that it is possible that all p2p platforms will be forced to ban cash trading in the future, but argued that, since its exchange is noncustodial and doesn’t hold any bitcoins or fiat money, it might have a better chance of being cleared to operate.

LocalEthereum brought up the same argument in its conversation with Cointelegraph, arguing that its platform is noncustodial as well, and hence might be exempt from certain regulations.

Youssef of Paxful also told Cointelegraph that its service is determined to keep the cash option:

“As the Age of Compliance begins to dawn, many P2P exchanges may need to ban cash transactions as they will not have the compliance resources to handle the anti-money laundering, safety, and regulatory issues, but not at Paxful. We have a top tier legal and compliance team and we are growing our compliance efforts immensely, keeping the door open for the unbanked and underbanked worldwide.”

Thus, it is unclear if there will be another crackdown on p2p exchanges, as it largely depends on the jurisdiction in which such services are based. As previous examples from the crypto industry have shown, a company might choose to move to another country when faced with extensive local regulatory difficulties.

As for now, the p2p exchanges segment seems puzzled by the sudden crackdown, according to what the Bisq representative told Cointelegraph:

“I don’t see how buying bitcoin with cash is any different from buying bananas or bullion with cash. Neither person knows the other person, and it doesn’t matter.”

However, he added, exchanges (even peer-to-peer ones) need to follow the laws of their jurisdictions — and traders should too.

The views and opinions expressed in the article LocalBitcoin Loses Traders After Cash Trading Ban: ‘Not Very Local’ do not reflect that of 48coins, nor of its originally published source. Article does not constitute financial advice. Kindly proceed with caution and always do your own research.