MoneyGram Stock Continues to Soar, When Will XRP Price Follow?

It wasn’t just Facebook making one of the biggest announcements and steps towards mainstream adoption in the crypto space this week. Ripple also announced a strategic partnership with international money transmission service MoneyGram that would see the company use its XRP crypto token and could possibly drive up XRP price.

MoneyGram’s stock has surged over 168% on the news, but although XRP price experienced an initial pop as the news was released, its since depreciated a few cents. The question remains: When will XRP price follow the major MoneyGram announcement and catch up to Bitcoin and the rest of the crypto market?

In an attempt to pre-empt the massive news of Facebook launching its own crypto with Libra, not to be outdone, Ripple revealed a $50 million investment in money transmission service provider, MoneyGram, in a move that will utilize XRP to facilitate cross-border transactions.

The news, arguably among the most significant to hit the space since its inception, is one of first examples of a crypto being widely adopted for its intended and designed use case. The significance alone sent the stock price per share of MoneyGram from roughly $1.45, to $3.90 at the most recent local high.

The partnership sees MoneyGram using XRP – the native crypto token of the Ripple blockchain – for digital remittance. The digital remittance market is said to reach $8.59 billion in USD by 2025. MoneyGram’s largest competitor, WesternUnion, also launched a pilot where it used the beta version of Ripple’s xRapid product.

WesternUnion ended the pilot, stating that Ripple was only able to meet its current throughputs and transaction speeds, offering no major improvements over its legacy systems. While some saw this as a failure for Ripple, CEO Brad Garlinghouse saw their beta product matching a decade-strong system from the industry leader as a massive success and achievement for the crypto-focused firm. 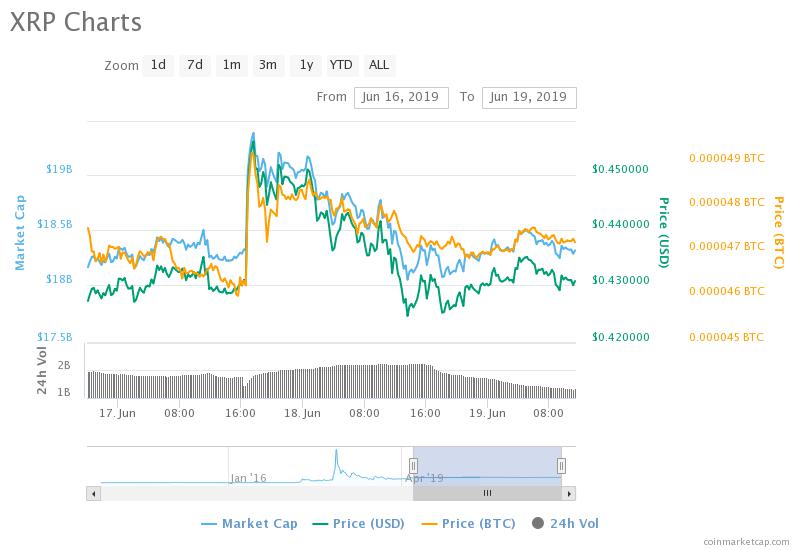 When Will XRP Price Catch Up to Partner Stock Surge?

Clearly, Wall Street has taken notice of the news as can be reflected in the price of MoneyGram shares. But what about XRP price? When will it finally show some positive movement for investors, and reflect the impact of what is one of the biggest announcements to ever hit the crypto industry?

I do not think the current price is fully reflective of the news being completely digested. Markets often under-react as people are initially anchored and info is not completely disseminated. This setup is worth taking, I think we see $XRP cover ground in the next two months. pic.twitter.com/vD3PXsByrj

It may not be for a while longer, potentially two months as the above analyst points out. But when it does resolve, investors are expecting XRP price to go on a moon mission.

In recent weeks, other analysts have called the XRP price chart the most bullish out of any major cap altcoins, like Ethereum, or even Litecoin, which is less than two months away from its halving event. Analysts also agree the bottom is in for XRP.

While longer term targets are calling for as much as $10 by the end of the year, short term, analyst are watching to see if the EMA10 and EMA20 hold up following a bearish engulfing candle forming after the MoneyGram news.

Bearish engulfing candle today. If the 10 and 20 ema’s hold it up, I would expect a hard run to test and possibly break the pennant. On the downside, watch the 50 ema and 78.6 retrace at .39. This pennant could take another month to play out.#XRP pic.twitter.com/G2iCSHPElS

A bounce there would sent XRP price upward to test the top of a multi-month pennant, which could finally cause XRP to break out of its bear market downtrend. When the pennant does resolve, and XRP breaks upward, the move is expected to be fast, violent, and incredibly profitable for anyone loading their bags with XRP currently.

The views and opinions expressed in the article MoneyGram Stock Continues to Soar, When Will XRP Price Follow? do not reflect that of 48coins, nor of its originally published source. Article does not constitute financial advice. Kindly proceed with caution and always do your own research.