On 30th August, a Reddit user posted a comparison between the net income of the cryptocurrency exchange Binance and the regular stock market NASDAQ. The study implied that in the 1st quarter of 2018, the net income of Binance and NASDAQ were recorded at $200 million and $209 million, respectively.

The study also stated that Binance was just 8 months old at the time of the calculation of profits, whereas NASDAQ has been around for more than 40 years, implying a fast-paced speed in its progress. 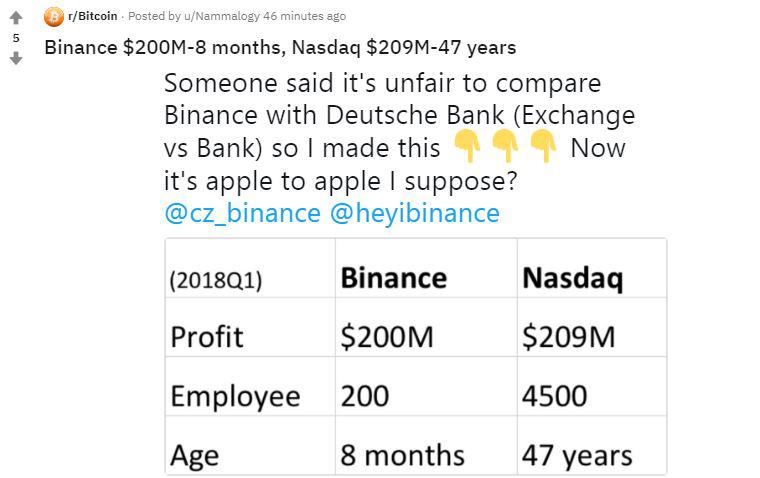 In a press-release launched by NASDAQ on 25th April 2018, it had clearly stated that its net income in Q1 of this year was $209.

The Reddit user posted this content in response to a previously conducted comparison between Binance and Deutsche Bank of Germany. Earlier this year, it was stated that the Deutsche Bank showed a net profit of $146 against the $200 million profit made by Binance in the first quarter surpassing the German investment bank founded in 1870.

Binance was founded in September 2017 and is the biggest cryptocurrency trading platform by trading volume. Recently, the platform also announced its Binance Labs Incubation Program, which is a 10-week on-site program designed for the development of more blockchain related startups. Furthermore, Binance also revealed to be pushing direct investments to provide back-up for the startups in the ecosystem.

At the close of July, the cryptocurrency platform also made its first-ever acquisition, Trust Wallet, signaling towards more control of its customer-base over their digital assets, as claimed by Binance. Trust Wallet was launched in November, last year and contains a crypto-wallet as well as a decentralized browser for the users.

On the Subreddit of Bitcoin where the Binance-NASDAQ comparison was first posted, a user named Stayathomepyrat in full agitation wrote:

Here, another crypto-user countered the above opinion and commented:

“What’s wrong with paying fees for a service? They aren’t holding a gun to anybody’s head and forcing them to pay.”

“I honestly think Binance’s profit is way more than 200M.”