The ongoing securities lawsuit between plaintiff David Oconer and Ripple Labs Inc. in the jurisdiction of San Mateo, California has seen an interesting turn of events. On 29th August the court ordered the case to be reassigned to Judge Marie S Weiner stating that the ‘matter is provisionally deemed and designated COMPLEX’. 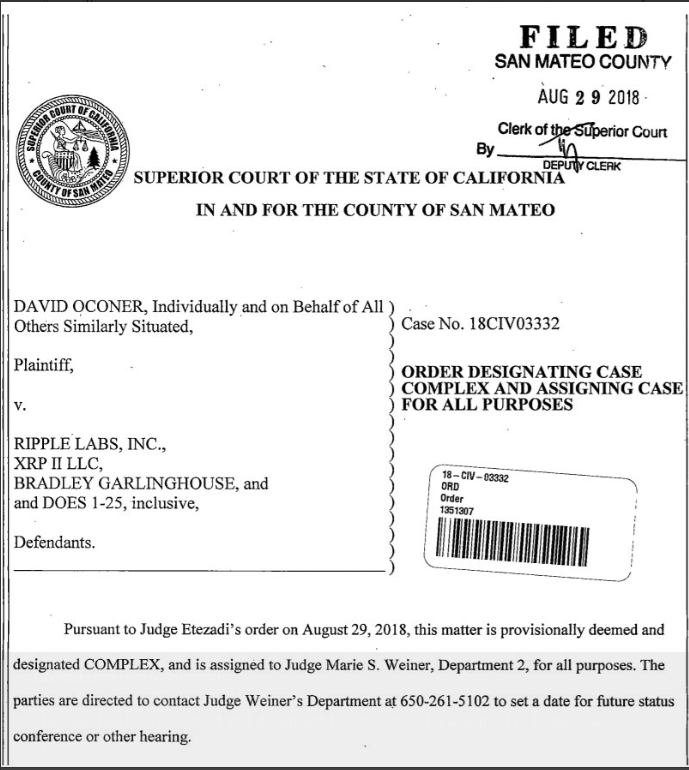 The ‘Oconer case’ saw the light in the month of July when  David Oconer filed a 28 pages long lawsuit against Ripple Labs. This was one of the many cases filed in the month of July, accusing XRP of being a security that was fully controlled and manipulated by Ripple. Furthermore, claiming that the U.S regulatory laws were violated.

Also, the complaint elaborated how Ripple has clearly violated the ‘Howey Test’. However, Ripple not taking any of the lawsuits in a light sense hired two former US Securities and Exchange Commission members Andrew Ceresney and Mary Jo White to lead the counsel for the Oconer case.

The surprising turn of events in the David Oconer case to be noted here is that Judge Marie S Weiner is the same Judge that Ripple wanted to be removed from the ongoing case against plaintiff Zakinov.

On 16th August, backed by Deborah McCrimmon [Senior Counsel for Ripple], Ripple filed for Judge Marie S Weiner to be removed. Ripple felt that the case will not receive a fair and impartial judgment under Judge Weiner. Honoring the same, the court fulfilled the request on 22nd August.

It is still not clear as to why Ripple Labs felt that Judge Weiner was impartial towards them in the Zakinov case. However, the case has now been reassigned to Judge Richard H. DuBois.

“Very strange to see the same judge Let’s see if she gets removed again.”

“I still have not heard the exact reason behind why the wanted the change, just that the attorney could testify to why if needed by the court, anyone else knows?”