In the April 2019 edition of the SFOX monthly volatility report, the SFOX research team has collected price, volume, and volatility data from eight major exchanges and liquidity providers to analyze the global performance of 6 leading cryptoassets — BTC, ETH, BCH, LTC, BSV, and ETC . The following is a report and analysis of their volatility, price correlations, and further development in the last month.

SFOX determines the monthly value of this index by using proprietary, quantifiable indicators to analyze three market factors: price momentum, market sentiment, and continued advancement of the sector. It is calculated using a proprietary formula that combines quantified data on search traffic, blockchain transactions, and moving averages. The index ranges from highly bearish to highly bullish.

Readers might have expected the multi-factor market index to have been upgraded to a more bullish level given the spike in crypto prices at the beginning of April, and it might, therefore, be surprising that the index remains set to ‘mildly bullish’ for the fourth month in a row. In light of this, it’s worth emphasizing the following two points:

The signal suggested by this index is positive for the overall sector: while some may worry about market sentiments such as FOMO overwhelming crypto in the wake of an abrupt and unexpected rally, the data interpreted by the index imply that crypto is continuing on a sustained positive trajectory, independent of more transient surges in market interest.

In April of 2019, BTC reasserted its influence over the collective crypto market by inciting a strong rally in the first few days of the month. Elsewhere, the highs and lows of cryptoassets like ETC and BSV showed the impact that single exchanges can still apparently exert on coin performance. Through it all, SFOX research witnessed continued interest of high-profile companies and institutions in further developing the crypto sector.

A sharp, unexpected rise in BTC’s price drove an increase in market cap and volatility at the beginning of the month (April 1st-3rd).

Between April 1st and April 3rd, the price of BTC increased over 20%, from $4122.92 to $5017.13. To the extent that this price surge has an explanation, the prevailing notion is that a 20,000 BTC buy order by an anonymous party on April 2nd threw supply and demand out of equilibrium. This order could possibly have then caused stops to be triggered, creating even more demand and increased buying.

Additionally, liquidations of large positions on Bitmex may have added fuel to the fire. This rally was highly publicized in the media, which could have theoretically caused people to experience some FOMO, which drove it even higher — similar to what was observed in late 2017, albeit on a smaller scale. At some point, this cycle ran out of steam, reaching a point at which sellers brought the supply and demand into balance, bringing the most recent price back to a new normalized level between $5000 and $5500, which BTC has only just broken out of in early May. This analysis is consistent with the sustained, higher level of BTC volatility that has been seen since its beginning-of-the-month spike.

ETC’s dramatic price increase may have pointed to upcoming improvements in its fundamentals — but it also highlighted the impact of singular exchanges on coin performance (April 7th).

On April 7th, the price of ETC climbed over 50%, from $5.84 to $8.91. Whether or not this short-lived spike was motivated by changes in ETC’s fundamentals is unclear.

On the one hand, this spike came two days after a public conference call in which the ETC ecosystem discussed its upcoming Atlantis hard fork; while this hard fork isn’t expected until mid-September 2019, its proposed changes are expected to make ETC less manipulable as a network and more DApp-friendly.

On the other hand, the data suggest that this price spike mostly came from a single source: reportedly, Coinbase Pro facilitated over 37% of ETC trading volume during this time, and ETC’s price on Coinbase Pro reached as high as $14 at peak — well above the marketwide volume-weighted average price.

This extreme discrepancy in ETC’s performance between exchanges invites the question of whether the crypto asset’s fundamentals were really responsible for its spike in volatility. 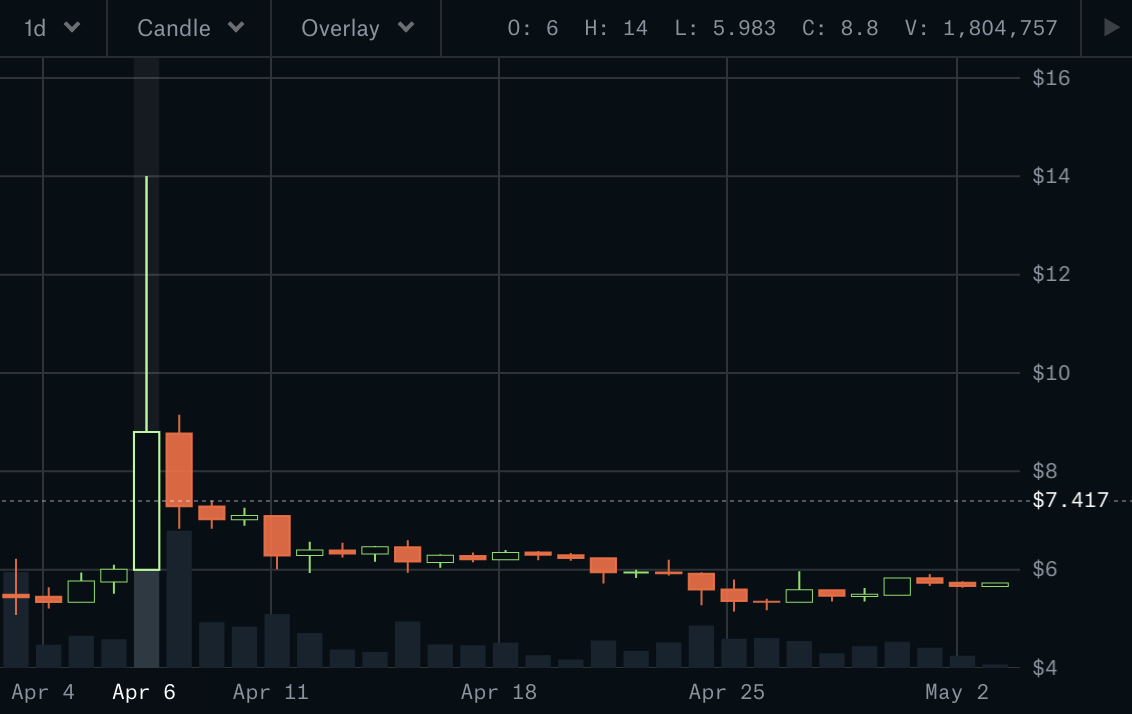 The delisting of BSV from Binance underscored the impact of major exchanges’ listing and delisting decisions on coin performance (April 11th-15th).

BSV made waves this month as Binance (followed by Kraken and ShapeShift) delisted the crypto asset, in what many believe was a reaction to BSV leader Dr. Craig Wright taking legal action against other members of the crypto community.

What’s especially noteworthy here is that BSV’s price and volatility seemed to correlate with delisting rumors and news. Binance CEO CZ first tweeted a threat to delist BSV from Binance on April 11th, and Binance subsequently delisted BSV on April 15th. In that same period, BSV’s price fell over 30%, from $80.68 on April 10th to $55.62 on April 16th. This suggests that listing and delisting assets, especially on major exchanges, may sharply impact their price and volatility.

Tether’s USDT stablecoin has been controversial in the past when it has been unclear whether each USDT is really 1:1 backed by U.S. dollars. In late April, Tether was again in the news when New York’s attorney general issued a report claiming that Bitfinex borrowed $850 million worth of USDT, backed by a revolving line of credit from Bitfinex, to cover its own shortfalls. Following this news, the volume-weighted average price of BTC fell over 6%, from $5487.31 on April 24th to $5150.79 on April 26th.

This report, along with its apparent impact on the market, highlighted the need for increased transparency throughout the market, especially amongst the companies and institutions responsible for major concentrations of funds.

Leading companies and institutions continue to demonstrate real interest and investment in the crypto sector.

While the “hype” around the beginning-of-April rally had somewhat dissipated by the end of the month, announcements came of more major companies exploring crypto projects and integrations, as discussed with regard to Visa and Facebook in last month’s report. April saw Nike and Jaguar join the ranks of companies exploring crypto: Nike has filed a patent for the word ‘cryptokicks’ and is reportedly working on a crypto asset-based ecommerce platform, while Jaguar Land Rover is reportedly partnering with IOTA to develop a system allowing car drivers and owners to earn cryptoassets. This reinforces the consistent narrative of institutional interest in crypto, which has persisted independently of “winters” and “rallies.”

Look to these events as potentially moving the volatility indices of BTC, ETH, BCH, LTC, BSV, and ETC in May:

The concentration of major players discussing crypto in one place in a small period of time, not to mention the potential for any announcements made at these conferences, may potentially impact the market’s volatility.

For greater graphical clarity, see this additional chart omitting BTC and the S&P 500 from the data set:

By looking at the 30-day historical volatilities of BTC, ETH, BCH, LTC, BSV, and ETC, it can be seen that the crypto sector’s volatility categorically spiked during the early-month jump in BTC’s price, reaching new levels that held throughout the month.

After a correction in these volatility ratios on April 3rd, the ratios remained mostly constant throughout the rest of the month. The two notable exceptions to this trend were (1) ETC’s spike in volatility on April 7th (discussed in the analysis above) and (2) BSV’s spike in volatility surrounding its delisting from BSV, Kraken, and ShapeShift.

Price Correlations: BTC Reasserting its Dominance — and Correlating Positively with the S&P 500

BTC’s 30-day price correlations to ETH and BCH closed the month as moderately positive (i.e. close to 1). The crypto asset least correlated to BTC was LTC, with a correlation of 0.314 — a fairly low correlation for a BTC/altcoin pair.

For a full crypto correlations matrix, see the following chart:

For much of the month, ETH, BCH, and LTC were all highly correlated with BTC, suggesting that BTC’s movement was largely driving market activity. Near the end of the month, however, all three of those correlations decrease along with overall trading volume, suggesting that the impact of BTC’s rally on the overall market had tapered somewhat.

The views and opinions expressed in the article SFOX Crypto Volatility Report April 2019: Still Mildly Bullish do not reflect that of 48coins, nor of its originally published source. Article does not constitute financial advice. Kindly proceed with caution and always do your own research..