Bitcoin SV (BSV) has had a big week. On Tuesday, its price jumped by just over 110%, leaping from about $62 at 1:14 p.m. UTC to $132 an hour later. Given that BSV had been having a rough time in the previous month, with a number of high-profile delistings, this dizzying price rise must have come as a relief to the supporters of the cryptocurrency and the company that created it — nChain.

And while explanations for sudden market shifts are often hard to come by in the cryptocurrency industry, some within the media pinned BSV’s abrupt climb on the news that nChain founder Craig Wright had filed a copyright registration for the original bitcoin white paper with the United States Copyright Office. Given that this registration identified Wright as “Satoshi Nakomoto” — a claim Wright has been making since December 2015 — it ostensibly provided him and bitcoin SV with a considerable injection of credibility and authority.

So, on the surface, at least, bitcoin SV’s price rise was the result of Craig Wright being seemingly “recognized” by the U.S. government as the true author of the bitcoin (BTC) white paper, and the market rushed to get its hands on the cryptocurrency he now backs.

However, this could show that Craig Wright is trying to ramp up his efforts to intimidate anyone who denies he’s Satoshi Nakamoto and/or calls him a fraud. But even if the filing represents a new peak (or low) in his attempts to browbeat detractors and rival cryptocurrencies, some may argue that this reveals a high level of ignorance and incompetence. The copyright has no legal bearing on attempts to pass off a cryptocurrency as the “real” bitcoin, something that Wright claims he wants to stamp out. 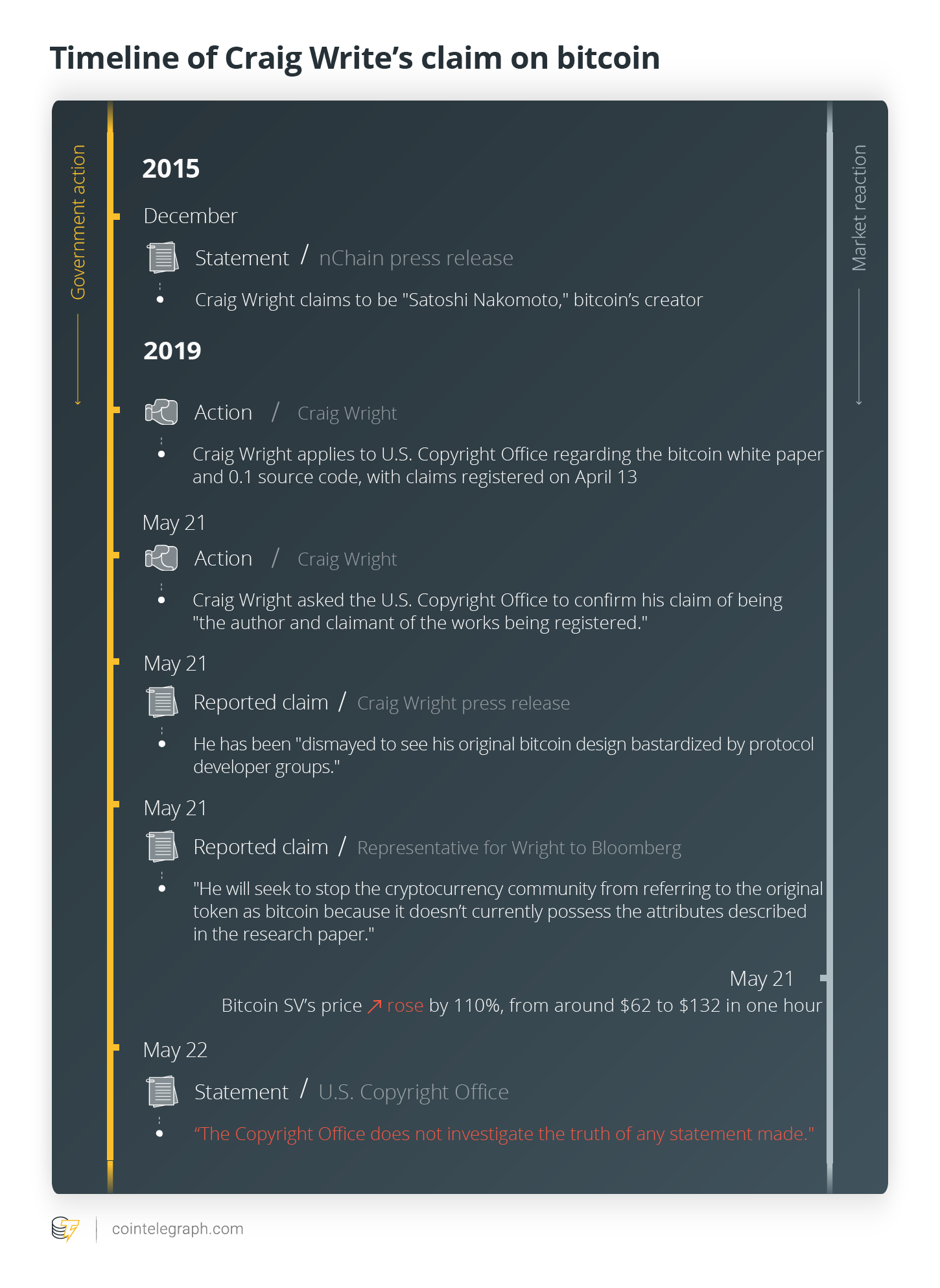 Wright has filed two copyright claims with the U.S. Copyright Office, with the office officially registering both of these in early April. One is a claim for the original bitcoin white paper, while the other is for most of the bitcoin 0.1 source code, with the nChain press release concerning these registrations summarizing them in the following way:

“U.S. copyright registration no. TX-8-708-058, effective date April 13, 2019, for computer program entitled bitcoin, with year of completion 2009 and date of first publication January 3, 2009. The registration recognizes the author as Craig Steven Wright, using the pseudonym Satoshi Nakamoto. Wright wrote most of version 0.1 of the bitcoin client software, and the registration covers the portions he authored.”

There’s no disputing that these registrations have been filed with the U.S. Copyright Office. Nonetheless, they don’t provide any real evidence of bitcoin authorship, since — as numerous commentators have pointed out — it’s highly unlikely that the Copyright Office required proof that Wright is “Satoshi Nakamoto” prior to registering the claim.

“This copyright registration doesn’t prove anything about who wrote the bitcoin white paper,” cryptocurrency author David Gerard told Cointelegraph. “Anyone can file a copyright registration on anything — there’s no checking. You’re just making a claim. Multiple people can claim the same work.” Indeed, almost anyone could register a similar claim, so long as they have $35 to spare and know how to fill in an application form.

Several renowned figures within the bitcoin community are even more dismissive of Wright’s copyright claim than Gerard. Entrepreneur and bitcoin core developer Jimmy Song told Cointelegraph, “Absolutely not. The only thing it proves is that CSW is a publicity seeking con-man, but we already knew that.”

In fact, such dismissals prompted the U.S. Copyright Office to respond on May 22 to the clamor over Wright’s new claim by releasing a press statement. The key part of this statement is the first paragraph, which reads:

As these opening sentences indicate, the likes of Gerard and Song may have a point. “It is possible for multiple, adverse claims to be registered at the Copyright Office,” the press release added, which also states that someone “who intentionally includes false information in an application may be subject to penalties.”

The press release goes into further detail regarding copyrights involving pseudonyms, once again affirming that no investigations were made by the Copyright Office. “In a case in which a work is registered under a pseudonym, the Copyright Office does not investigate whether there is a provable connection between the claimant and the pseudonymous author,” reinforcing the assumption that the office isn’t qualified to settle the true authorship of cryptography-based works.

The nChain press release did state that the Copyright Office registered the claim “after receiving confirmation from Wright that he is Satoshi Nakamoto.” That said, the office’s press release makes it clear that it simply asked him to confirm for a second time that he was indeed claiming to be “the author and claimant of the works being registered.” So, there’s no indication whatsoever that Wright actually shared proof of Nakamoto’s real identity with the office, potentially contradicting the nChain press release.

What is the reason?

So, if the registered copyright claims don’t or can’t prove anything about Craig Wright’s involvement with bitcoin, the question arises as to why the Australian would want to file them. Well, leaving aside the unproven possibility that he may have been trying to pump bitcoin SV’s price, it’s worth viewing the claims in light of all the recent threats of litigation he’s been making toward various members of the crypto community.

For example, bitcoin podcast host Peter McCormack was served with a claim for 100,000 British pounds (around $130,000), after he had refused to apologize for asserting that Wright was lying about being Nakamoto. Likewise, Wright’s lawyers had also threatened to sue Twitter personality Hodlonaut for the same reason, an action that contributed to Binance’s decision to delist bitcoin SV, likewise with Kraken, ShapeShift and other exchanges and services.

U.S. federal law requires that the authors register a claim in order to sue anyone who violates their copyright. So, in the light of Craig Wright’s certain litigious tendencies, the move would make sense. According to Gerard:

“You need to file a copyright registration to take someone to federal court over a copyright violation in the US. If you do this within five years of publication, it’s taken as prima facie evidence that your claims are true, and the defendant has to show they’re not. But this registration is ten years since the publication, so it doesn’t even have that force.”

Not only does Wright’s copyright claim not have that force, but there are other problems that would get in the way of Wright suing any of his critics or rivals. As many people on Twitter and other social platforms have already pointed out, bitcoin was originally released under an open-source MIT License. This means that anyone is free to reuse, copy or modify bitcoin’s original source code however they see fit, regardless of whether they’re doing so for profit or not. Because of this, it would presumably be very difficult for Wright to sue someone successfully, seeing as how “Satoshi Nakamoto” — or Wright himself, as he claims — originally declared that anyone could use bitcoin in whichever way they liked.

The difficulties in suing on the basis of copyright claims don’t end there for Wright, who stated in his press release that he has been “dismayed to see his original bitcoin design bastardized by protocol developer groups — first by Bitcoin Core (BTC) in 2017 and then again by bitcoin cash (BCH) developers in 2018.” Likewise, a representative for Wright told Bloomberg that “he will seek to stop the cryptocurrency community from referring to the original token as bitcoin because it doesn’t currently possess the attributes described in the research paper.” However, it’s not at all clear how he might hope to achieve those goals via the legal mechanism of a copyright.

As Gerard said, copyright has “no bearing at all” on the issue of someone giving their own work a name (i.e., “bitcoin”) associated with someone else’s work. “‘Passing off’ is the sort of thing that trademark law is intended to address,” Gerard added, “but copyright and trademarks are entirely separate things.”

Indeed, the U.S. Copyright Office states in its May 22 press release that it “does not have an opposition procedure for copyright registrations, such as the procedures available at the Patent and Trademark Office for patents and trademark registrations.” And make no mistake, copyright is not the same thing as a trademark, which, as the Copyright Alliance explained, differs from a copyright in that “it’s a word, phrase, symbol, and/or design that identifies and distinguishes the source of the goods of one party from those of others.” By contrast, copyright covers “the right to reproduce the work, to prepare derivative works, to distribute copies,” and so on.

In other words, Wright would need to register “bitcoin” as a trademark in order to prevent other groups and individuals from using this name with their cryptocurrencies and from passing them off as the “true” bitcoin. And it is not entirely certain if his new copyright claim is even registered because, as the Copyright Office has stated elsewhere on its website, “Copyright does not protect facts, ideas, systems, or methods of operation, although it may protect the way these things are expressed.”

Put differently, copyright protects the particular form in which ideas are expressed rather than the ideas themselves. As such, even if Wright could somehow prove his identity as “Satoshi Nakamoto,” there’s still a good chance that he’d fail to sue anyone else for violation of copyright. This is because unless any potential defendant copies the bitcoin white paper or 0.1 source code word-for-word, there’s unlikely to be any real ground for establishing that a cryptocurrency harnessing similar principles to the original bitcoin is a copyright violation.

Where now for Craig Wright?

Craig Wright’s copyright claim is effectively incapable of working as proof of origin or of acting as a means of silencing his critics. Though the bitcoin SV rally on May 21 would suggest that the copyright claim has actually had some effect, the fact that BSV rose by 110% within only one hour raises some serious doubts as to its grassroots legitimacy.

Still, there is one thing Craig Wright has succeeded in, even if most people within the crypto community still don’t believe he’s Satoshi: He continues to keep himself in the public eye, ensuring that the media continues to write about him. As Song said, “CSW does things for publicity and public manipulation. I’m guessing that since his attempts at fraud using cryptography have done so terribly, that he’s trying to use the court system to force people to accept him as Satoshi.”

The question is, where does Wright go from here? It’s highly unlikely that he’ll follow through with his new copyright claim and actually sue the developers behind BTC or BCH. If he does, he’ll be forced to prove that he is Satoshi Nakamoto, and if he fails to prove this in court, he’ll be at risk of prosecution for fraud (given his filed claim).

What’s more likely is that he’ll continue doing what he does: threaten his belittlers with legal action, without taking his chest-thumping much further. And even if the new copyright adds a little more weight to the legal threats, most commentators believe nothing much will change as a result of them. As Jimmy Song concluded, “Much like his previous attempts, I predict complete and utter failure.”

The views and opinions expressed in the article Staking Claim on Bitcoin — Does Craig Wright’s Copyright Filing Hold Legal Merit? do not reflect that of 48coins, nor of its originally published source. Article does not constitute financial advice. Kindly proceed with caution and always do your own research.