Where Will Users Draw the Line?

Facebook’s cryptocurrency project has gained a lot of media attention recently–and rightfully so.

Earlier this month, it was announced that the project, which had remained under wraps for months, was to be launched in a matter of weeks. Talks with regulators have been underway; some analysts are saying that Facebook’s cryptocoin is the biggest thing that has happened to the industry since the birth of Bitcoin.

But not all has been well in Facebook’s recent dealings with cryptocurrency-related matters. Since Facebook’s comprehensive ban on advertising for crypto-related products and services was lifted a year ago, a number of fraudulent companies have managed to slip through the social media network’s vetting process.

Why is this continuing to happen? And what does it mean for Facebook’s cryptocurrency?

John De Mol, a Dutch billionaire and creator of the “Big Brother” reality TV show, was embroiled in one of the latest incidences of fraudulent crypto advertising on Facebook. Like many other celebrities, De Mol’s likeness was used in an advertisement for a fraudulent cryptocurrency campaign.

Ads that contained pictures of De Mol and claimed that he endorsed fake companies that invited people to send Bitcoin or otherwise participate in fake crypto-related businesses first appeared earlier this year.

After Facebook reportedly failed to response to De Mol’s complaints about the advertisements, which caused damage to his reputation, he launched a lawsuit against the social media giant earlier this week.

So, how would one go about placing an ad for a crypto company on Facebook?

After submitting the necessary details, Facebook simply writes that “during the ad review process, we’ll check your ad’s images, text, targeting, and positioning, in addition to the content on your ad’s landing page.”

“Your ad may not be approved if the landing page content isn’t fully functional, doesn’t match the product/service promoted in your ad or doesn’t fully comply with our Advertising Policies,” the page continues.

The policy also reportedly involves a specific set of questions that must be answered. “Advertisers wanting to run ads for cryptocurrency products and services must submit an application to help us assess their eligibility — including any licenses they have obtained, whether they are traded on a public stock exchange, and other relevant public background on their business.” 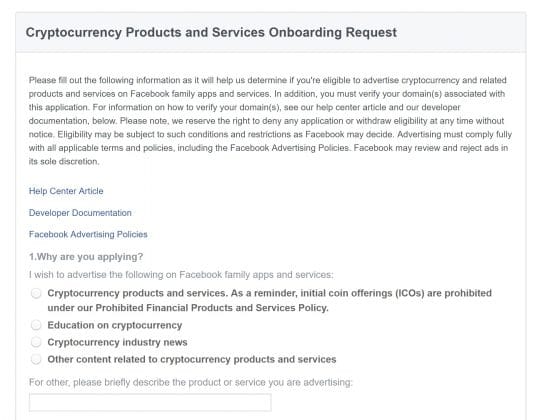 “I don’t know what reality Facebook lives in, but that doesn’t work,” Schaap said.

Still, Facebook insists that it’s doing its best at preventing incidents like this one from becoming commonplace. According to Rob Leathern, Facebook’s director of product management, the company takes “misleading ads that violate our policy, and those that feature public figures, very seriously.” 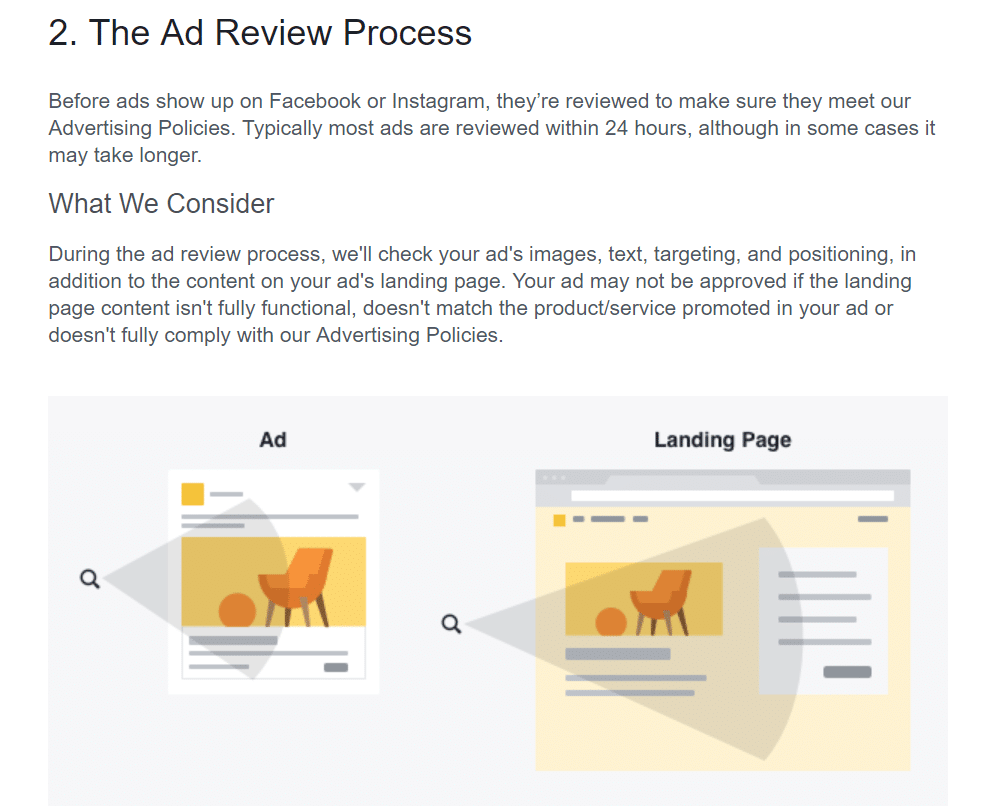 But another of Facebook’s lawyers, Jens van den Brink, conceded that the company “could not be forced to monitor all ads on its platforms at all times,” according to Reuters. He added that Facebook is also struggling to deal with advertisers who change the content of their websites after the ads are approved and broadcasted on the network.

“The people who push these kinds of ads are persistent, they are well-funded and they are constantly evolving their deceptive tactics to get around our systems,” Leathern added.

“Dealing with the fraudulent crypto ads might not be insurmountable — but at the very least, incredibly difficult to stamp out, even for a company of Facebook’s scale and resources,” wrote Vaclav Vincalek, CEO of IT consulting firm PCIS, to Finance Magnates.

How to Prepare for CySEC’s New Tiered LeverageGo to article >>

Vincalek said that the issue is actually sort of a “good” problem to have–”In fact, the problem party stems from Facebook’s success in the marketplace. They’re dealing with millions of ads (not just for cryptocurrency, but for any conceivable product or service).”

“Any algorithm they could devise is still going to require manual checking to verify if ads are fraudulent.

Kyle Asman, Partner at BX3 Capital, echoed Vincalek in an email to Finance Magnates “It’s because of their sheer size that media giants such as Facebook and Google have issues with fraudulent advertising due to their size,” he said.

“It is well-nigh impossible for them to ensure that no fraud is taking place on their platform.”

Facebook isn’t alone in its struggle–Twitter, LinkedIn, Google, and many others have struggled to keep their networks free from fraudulent crypto-related activity. “I don’t believe any of the big tech companies have figured it out yet, though they have all tried different approaches.”

Return of the Bans?

However, most of these “approaches”–at one stage or another–have involved a complete and outright ban on cryptocurrency-related advertisements.

In fact, Facebook itself was one of the first to wipe itself clean of all crypto-related ads with a comprehensive ban in January of 2018; the social media network announced that it would “prohibit ads that promote financial products and services that are frequently associated with misleading or deceptive promotional practices, such as binary options, initial coin offerings, and cryptocurrency.”

“This policy is intentionally broad while we work to better detect deceptive and misleading advertising practices… We will revisit this policy and how we enforce it as our signals improve.”

Six months passed before the ban was eased. “Starting June 26, we’ll be updating our policy to allow ads that promote cryptocurrency and related content from pre-approved advertisers,” Leathern explained in another announcement. “But we’ll continue to prohibit ads that promote binary options and initial coin offerings.”

However, Facebook still hasn’t managed to scrub itself clean of crypto-related fraud. And at the moment, Facebook is currently the only social media giant that is working on launching a cryptocurrency itself. Therefore, the stakes for trust in the network’s crypto-related dealings are a bit higher.

But could another ban be the solution?

The Scalpel and the Sledgehammer

“Prohibition of anything is rarely the answer,” wrote Martin Floreani, CEO of Rokfin, in an email to Finance Magnates. “There needs to be a thoughtful policy enacted that utilizes a scalpel rather than a sledgehammer.”

“I don’t think we will see another blanket ban, as the cryptocurrency industry has cleaned itself up significantly,” Kyle Asman added, which is arguably true–although more cryptocurrency was stolen through theft and fraud in the first quarter of this year than most of last year, the quantity of crypto scams is decreasing–even if the quality of the scams seems to be increasing.

But again, the circumstances are a bit different now than they were when Facebook originally instituted its ban. The company is slated to launch its own cryptocurrency sometime this month. How can users trust the Facebook cryptocurrency if they can’t trust the cryptocurrency-related products and services that Facebook advertises?

Facebook has become almost notorious from exploiting and mishandling its users’ data with incidences like the Cambridge Analytica scandal and policies that allow the company to profit from user data without financially compensating users.

”Aven if you’re not clicking on the ads, Facebook makes serious money off you by selling [your] data to advertisers,” Vaclav Vincalek wrote in a blog post–and the new cryptocurrency will make the company even more profitable. “With a cryptocurrency, now they will have the capacity to take every dollar from you.”

But Kataria pointed to the fact that Facebook’s users continue to trust the platform enough to use it regularly in spite of its failures–and that Facebook knows this. Indeed, users have easily forgiven Facebook for serious breaches of their trust in the past.

“Customer trust and payments are both critical elements to Facebook’s future success, so as a potential catalyst for both, Facebook’s crypto offering is also a very well calculated risk,” he said.

“And don’t forget they’ve been watching digital assets evolve from the sidelines for a while so they’ve had a chance to see others’ strategic, regulatory, and financial missteps.”

For now, it seems that users need to continue to look out for themselves.

“As with any other investment, you need to study it, analyze the risk, set a strategy and be willing to weigh the risks and rewards,” wrote Vincalek. “There are no guarantees with cryptocurrencies or anything else.”

Kyle Asman agreed that users shouldn’t place their trust in the ads that Facebook broadcasts. “Investors can keep themselves safe by doing their homework and proper due diligence. Nobody should be making investments based on a Facebook ad.”

The views and opinions expressed in the article Where Will Users Draw the Line? do not reflect that of 48coins, nor of its originally published source. Article does not constitute financial advice. Kindly proceed with caution and always do your own research.