Analysts often refer to Coinbase as the “kingmaker,” and in the recent past, crypto assets listed on the exchange have experienced significant spikes in price and market cap. In consideration of this, one may ask, what is suppressing the XRP price?

Ripple Continues To March On

Coinbase ended months of speculation recently with the inclusion of XRP on its platform. For Ripple, it was yet another progressive step towards becoming the standard for international money transfers.

The project, which has a global network of over 200 banks and payment providers, deserves credit for leading the industry as far as practical use case is concerned. Indeed, whether you love XRP, or not, there is no denying its capacity to get things done.

Last year some notable critics said financial institutions would never use a digital asset in their payment flows. As I said then, if it offers their customers a better experience at a lower cost, they will – and they are! https://t.co/ZX3RDotmhQ

On Monday 25th February, news spread rapidly about the listing of XRP on Coinbase. The XRP/BTC price peaked at 0.000087915, a 10% increase, but this movement soon retraced. While the gain was somewhat notable, many holders were left feeling underwhelmed.

As far back as January 2018, technology reporter Nathaniel Popper questioned whether the hype around Ripple’s partnerships has any substance. When investigated what banking insiders had to say about XRP adoption, the overall sentiment was tepid.

Over the last day I’ve asked several people close to banks if banks are indeed planning to begin using Ripple’s token, XRP, in a serious way, which is what investors seem to assume when they buy in at the current XRP prices. This is a sampling of what I heard back: pic.twitter.com/zbfMqg4TpD

The Twitter conversation that followed saw Brad Garlinghouse wade into the discussion, arguing the merits of XRP.  He went on to say:

“Over the last few months I’ve spoken with ACTUAL banks and payment providers. They are indeed planning to use xRapid (our XRP liquidity product) in a serious way.”

He ended with a list of comments, from testers, giving positive feedback on improved efficiency, smooth pilot runs, and a noticeable reduction in fees.

Fast forward to the present, and Julian Lehman makes the striking claim that only eight of the two-hundred partners are currently using XRP on a regular basis.

He lists them as:

This highlights the distinction between the success of Ripple onboarding partners and XRP adoption. XRP supports would argue the onboarding process is merely the first step. However, critics see XRP as a superfluous add-on and judging by the poor uptake, one that many are loathed to take.

Ripple is not XRP

There is an ongoing effort, by Ripple, to separate itself from the digital asset XRP. Last summer, it posted a tweet to that effect.

The digital asset #XRP and the company #Ripple are distinctly different. Learn why. https://t.co/yv8cW1gYH6 pic.twitter.com/w3npq2O894

There is much speculation as to why. Some see this as a tactic to circumvent claims of XRP being a security. And with Coinbase CEO Asiff Hirji stating:

“[Coinbase] will only list digital currencies that are a regulatory certainty.”

On the face of things, it would seem as though XRP is not a security token. However, the SEC has yet to give their official ruling on the matter. And considering the ramifications across the entire industry, the delay is somewhat forgivable.  That being so, it is unreasonable to expect significant price action when XRP is caught in regulatory limbo.

On a related matter, Ripple is currently subject to a series of class action lawsuits. All allegations are based on the violation of State and Federal law by failing to register XRP with the SEC before offering, promoting and selling to retail investors. To which, the plaintiffs are claiming injury.

At present, there is ongoing posturing over court jurisdictions, and a case has yet to be heard.  Jake Chervinsky, Lawyer at Kobre & Kim LLP, tweeted an update of the situation:

Ripple securities class action update: The Court has denied the plaintiffs’ motions to remand. This means the case stays in federal court, a minor but meaningful victory for Ripple.

The plaintiffs will file an Amended Consolidated Complaint by March 30.https://t.co/4gdQVaCrlM

The lawsuits put XRP in a further state of uncertainty, which could have continued to affect the price of the asset and the confidence of investors in XRP.

And while some believe these actions have no real standing, being merely symptomatic of a litigation culture, the fact remains that the plaintiffs do have recourse to exercise their legal rights. With that in mind, and in consideration of the consequences of a plaintiff win, this situation remains a compelling factor to a cautious market.

JP Morgan CEO Jamie Dimon went on record, less than two years ago, to denounce Bitcoin as a fraud. By extension, the entire blockchain industry took exception to the comment, sparking further controversy around cryptocurrencies in general. Following on from that, in an unexpected move last month, JP Morgan announced its own cryptocurrency to rival XRP. Details remain scant. However, JPM Coin will position itself as a stable coin pegged to the USD. Trials are expected to roll out later this year.

BREAKING: JPMorgan CEO Jamie Dimon says bitcoin “is a fraud” that will eventually blow up https://t.co/ZnbSx16LT9

This announcement sent news channels into a spin, and for good reason too. While it remains uncertain whether this should be construed as a major U.S bank endorsing cryptocurrency, or just an act of FOMO, there is little doubt over JP Morgan’s credibility, and potential to turn the blockchain industry on its head. This presents a real threat to Ripple and XRP and one that cannot be ignored.

So far, since the announcement, the XRP price has been in slight decline, but still in line with broader market trends. As further reports on JPM Coin are released over the coming months, it will be interesting to see how this plays out.

Up until as recently as fall last year, Coinbase users could only trade Bitcoin, Bitcoin Cash, Ethereum, and Litecoin. This earned the platform a prudent reputation but was still highly regarded due to its friendly UI and indemnity cover. Today, Coinbase now supports 18 cryptocurrencies, with plans to add more.

Back in May 2017, when Coinbase added Litecoin, the price soared by 40% against BTC, with rumors of this addition likely contributing to a 170%+ rally over the preceding two months. Considering that Litecoin was now more accessible to buy and store, a 40% increase can be justified.

However, times have changed, and the market has matured. Users now expect more choice, and in the face of increasing competition, having only four cryptocurrencies available is not good enough. With the recent addition of more cryptocurrencies to their platform, it seems as though Coinbase has finally conceded to this. But, is it too late? Coinmarketcap ranks Coinbase as 39th by 24-hour volume, and almost all of the exchanges above it were launched after Coinbase had listed Litecoin. 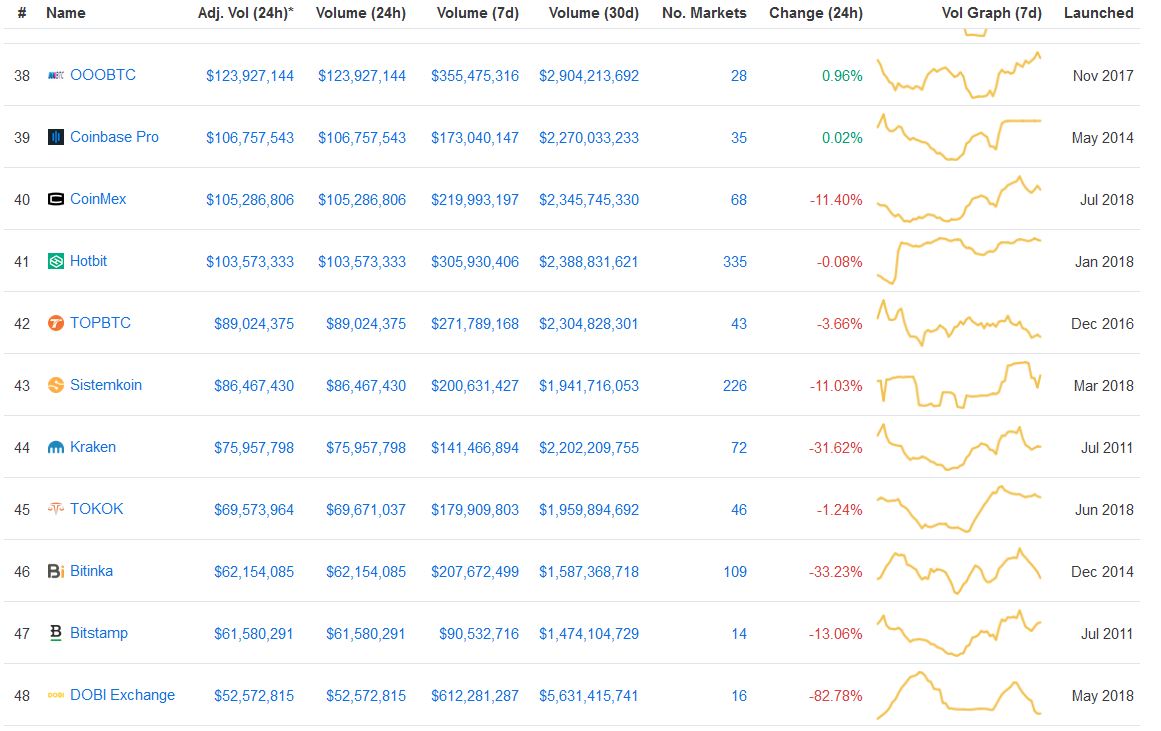 When people talk about the Coinbase effect, they are referring to market conditions that are unlikely to happen again. While XRP being listed on Coinbase should be taken as positive news, a major price pump should not be expected as Coinbase no longer holds the influence it once did.

The last annual Swell Conference took place in San Francisco over two days from 1st October 2018. It represents an opportunity for Ripple to have an open dialogue on changing the way money is moved. Rumors abounded that Ripple would launch xRapid at the conference, and influencers were pumped to share their thoughts. The general belief was that, following the official launch of xRapid, institutional users would significantly increase volume, and therefore price.

The XRP/BTC price started climbing about two weeks before Swell. At one point, even before the conference had begun, the price spiked as high as 0.00011763. Following the conference, the anticipated major rally never materialized, this left many wondering what had happened.

At the time, most outlets explained this by concluding that these things take time. But with the benefit of hindsight, we now know that just a handful of Ripple partners actual use XRP. Meaning the rumors of significant volume were nothing but hype. We’ve all heard the adage, “buy the rumor, sell the news,” and in the case of XRP price, it would be mindful for investors to reconsider their expectations of return, especially so in a bear market.

As things stand, XRP is at a regulatory and legal intersection, the outcomes of which could be disastrous not only for Ripple but the wider crypto-community as well. On top of which, a maturing market no longer gives as much credence to Coinbase listings or baseless hype. The entry of JP Morgan into the mix presents a major concern, but the lack of information means investors can do nothing but wait.  While XRP holders are right to question why significant events have little bearing on the price, this expectation is based on circumstances that no longer apply.

The views and opinions expressed in the article Why Didn’t Ripple Surge Following Coinbase Listing and Optimistic Partnerships? do not reflect that of 48coins.com nor of its originally published source. Article does not constitute financial advice. Proceed with caution and always do your own research.

In rounding off this piece: Why Didn’t Ripple Surge Following Coinbase Listing and Optimistic Partnerships?. Here’re most prominent words: