Why is BSV Going to the Moon?

Well folks, we’re running on about two months of bullish energy–the crypto rally that started at the beginning of April is starting to look like more than just a fluke. Things are going well, and there’s no sign of slowing down anytime soon–Bitcoin rose 67 (67!) percent over the course of the month of May, briefly peaking around $8900. (We’ve seen a healthy correction to $7765 in the five days since.)

And for as great as those gains are, Bitcoin was only the tenth-best performer throughout the month, according to data from Messari.io. Most of the month’s best performers were relatively unknown altcoins–Chainlink, Dent, Bitcoin Gold, and Holochain were among them. The clear leader of the pack, however, was none other than Bitcoin SV (Satoshi’s Vision), the controversial cryptocurrency formed earlier this year by self-proclaimed Bitcoin creator Craig Wright.

Due to several price surges, the value of BSV increased a whopping 231 percent over the month of May, and adding a few more percentage points in the first week of June. At press time, BSV ranked at $227.55 per token.

Before we dive into the theories about why the price of BSV is rising so quickly, a bit of background.

Wright’s version of the protocol–the protocol that would eventually be used to create Bitcoin SV–would make blocks 128mb each, four times the size that Bitcoin ABC proposed Bitcoin Cash’s block size to be.

What should have been a community-led vote on which protocol to proceed with quickly turned into a puerile battle of egos. Both sides of the BCH debate allegedly rented out massive amounts of “hash power” or mining power (which, in this case, translates directly into voting power) and attempted to stick their own solutions onto the Bitcoin Cash blockchain.

The egotistical hash war did massive damage to the public image of the cryptocurrency industry as a whole, and was (arguably) one of the factors that drove the price of Bitcoin down to its yearly low of roughly $3300.

Although Wright ultimately lost the hash war (his protocol wasn’t chosen to be grafted onto the Bitcoin Cash network), a new cryptocurrency–his own creation–was born, followed by a series of bizarre publicity stunts.

In the time following the birth of BSV, Craig Wright has threatened to take legal action–rap battle-style–against those who dare to publicly question his claims that he is indeed Satoshi Nakamoto, the mysterious creator of Bitcoin.

Wright has also filed a copyright registration on the original Bitcoin whitepaper in an apparent preemptive step to gear up for these legal battles (that may or may not ever happen.)

But while much of the cryptocurrency community scoffed at Wright’s attempts to assert himself as Satoshi–and some exchanges have gone so far as to delist BSV entirely–the price movements that have followed Craig’s bombastic behavior showed that the man must be doing something right (or Wright, if you will.) 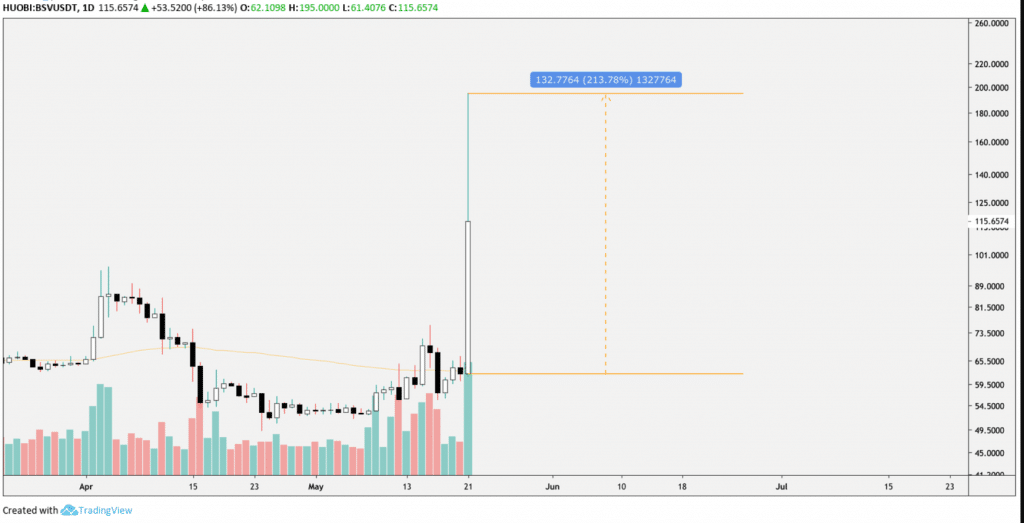 However, Coin Center executive director Jerry Brito was quick to remind crypto traders who may have gone keen on the asset that the registration probably won’t mean much in the grand scheme of things.

“Registering a copyright is just filing a form,” Brito wrote on Twitter. “The Copyright Office does not investigate the validity of the claim; they just register it. Unfortunately, there is no official way to change registration. If there are competing claims, the Office will just register all of them.”

But the price only continued to surge. From May 26th to 29th, BSV rose another 50 percent. While the exact cause is unclear, renowned crypto commentator Dovey Wan said that the rise may have had something to do with a piece of fake news that was circulated widely throughout China.

Seems someone did it purposely just around the same time BSV pumped just an hour ago.

“CSW (Craig Wright) Transferred 50K BTC from the biggest BTC wallet to Binance, which confirmed he is the real Satoshi,” the post reads. “As such CZ will re-list BSV and make an official apology on Twitter.”

Binance CEO Changpeng Zhao publicly announced that Binance would no longer list BSV in April, saying that Wright could easily prove himself to be Satoshi by sending a transaction from an address that is known to belong to Satoshi. (Wright still hasn’t done this.)

Wright has since launched a defamation campaign against Binance, saying that a large portion of its funds go towards human trafficking operations.

WTF is this guy talking about?

According to Craig Wright, in his talk today from @RealCoinGeek Toronto

“Thirty percent of @binance and @Tether_to funds women in slavery.”

I can’t wait to see how the cultists attempt to explain how this statement is somehow true. pic.twitter.com/JDxHixcrbi

Changpeng Zhao said that his exchange wouldn’t be suing Wright, perhaps understanding that engaging with Wright any further could potentially give credence to the statements and further his goal to being publicly acknowledged as Satoshi.

“Giving attention is probably what wants,” Zhao Tweeted in response to Peter McCormack, a crypto podcast host who has also been one of the unfortunate targets of Wright’s vitriol. “We ignore stupid stuff, and focus on things that matter. #BUIDL (sic).”

But regardless of the false nature of the report, Bitcoin SV has managed to hold onto the gains that it allegedly stirred in the first place.

And Wright is gearing up to continue his battle to assert himself as Satoshi. Less than three weeks after Wright filed the copyright registration, another registration for the Bitcoin whitepaper appeared on the books–this one from a ‘Wei Liu’, who has been speculated to be the CEO of crypto market research firm Coinsummer.

“This is what we’d hoped would happen — I registered my copyright as I intend to enforce this — the fact somebody has put their head above parapet is ideal as we can now proceed to show credentials and let a judge decide which is we’ve said we want all along,” Wright wrote in an email to the Financial Times.

“I hope this ‘Wei Liu’ is ready to testify under oath about how he knowingly lied on his copyright application, which is a federal crime in the United States.”

Although Liu said that he filed the registration simply to prove a point (“I filed it just to let people know anyone can register a copyright. Everyone can be Satoshi Nakamoto,” he told CoinDesk), it is also true that Liu violated federal law. But unlike Wright seems to think, prosecutions for this kind of thing are extremely rare–usually, the worst thing that happens is a $2500 fine.

In any case, however, Wright seems to see the Liu’s filing as an opportunity to start another ugly legal battle–or at least to threaten one. And unless there’s some kind of an “I am Spartacus” movement in the Bitcoin community, Liu could take the brunt of the heat–and the publicity could drive BSV’s price even higher.

Naturally, the persistence of Wright’s rather outlandish behavior has continually drawn backlash from much of the cryptocurrency community.

Vitalik Buterin, the wunderkind creator of Ethereum, has spoken out against Wright in the past. He reaffirmed his sentiments this week with a statement to Hardcore Crypto: “Obviously BSV is a complete scam,” he said.

But surprisingly, Buterin also pointed to some of the criticism against Binance for delisting the asset. “The delisting from Binance – that was interesting,” he said. “There’s arguments in favour of it, but then there’s also an argument that this is a centralized exchange that’s wielding a lot of power.”

And the criticisms are valid–right now, CEOs of centralized exchanges do have the power to independently decide to list or delist an asset based on something as simple as a personal dispute.

No Such Thing as Bad Publicity

If nothing else, Wright’s behavior has certainly revealed some weak spots in the cryptosphere. In addition to this “over-centralization”, the explosion of BSV has revealed that the industry is much more susceptible to hype and cult of personality than many may have liked to believe.

After all, a brash, bombastic figure was able to enter into the industry, make a bunch of bold, unproven claims, and quickly rise to the center of attention using a quiver full of threats and corporate populism.

This man, the very same man who was–and is–considered to be the laughing stock of the cryptosphere by many high-up intellectual and financial figures, is (arguably) finding–um, unpresidented success.

The views and opinions expressed in the article Why is BSV Going to the Moon? do not reflect that of 48coins, nor of its originally published source. Article does not constitute financial advice. Kindly proceed with caution and always do your own research.